12 Labours of Hercules Ultra, Beyond Marathon

When the event was first announced (I think just after Dusk 'til Dawn 50) I knew it would be an interesting event!  Predominantly an ultra run with elements on mountain marathon and adventure race type events. Competitors had 24 hours to complete as many labours as possible (out of a possible 12) which varied in distance from a central location (Losehill hall YHA near Castleton in the Peak District) from 0.5 miles away to 6 miles away. Each out and back leg could be completed in any order and most had a task associated to them with spot prizes for the winner of the task. 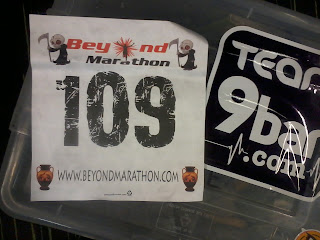 Assuming you finished all labours there was 78 miles with 17000ft of ascent. Competitors were a mix of teams (ARGONAUTS), pairs (TITANS) and solos about 80 people started. I was the first finisher overall (ahead of teams and pairs too) just over 4 hours ahead of the 2nd solo.  Full results are up on the website. First 6 finishers here. Great event all round, ideal first ultra perhaps, you're never far from the base and you can run anything from 1 to 78 miles! 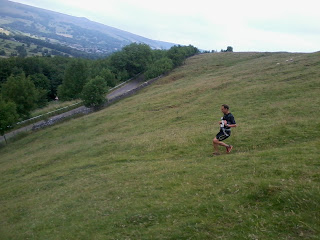 To keep everyone accounted for there were large sheets with each cp written on at the main HQ and competitors signed in and out on there although there were also electronic timing chips to keep track of every bodies times too. Seeing as you could really go in any order you liked it was hard to tell who was in what position and it was quite amusing to people running in all sorts of directions. Best to know where you are going! On receiving the map I knew most of the cp locations although there were one or 2 bits I couldn't remember running on before. I didn't get too concerned about the order except that I left the long one (12 mile) until last as it was mainly road and I wanted to do 8 while I had a good pace on to bag the spot prize for fastest to complete the leg (which I managed) 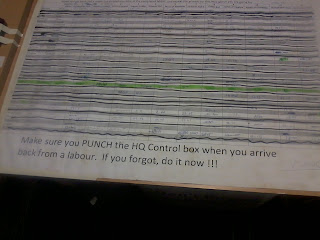 From the start the majority had chosen cp 2 which was in Peak Cavern, so to avoid traffic I decided to opt for a short 4 miler and then go back for that one second as to avoid the crowds. We had one of the most detailed race briefings ever known to a runner and as always with a Beyond Marathon event all the details had been calculated and the event went incredibly smoothly. I would challenge you to find a race with so many variables so well organised! 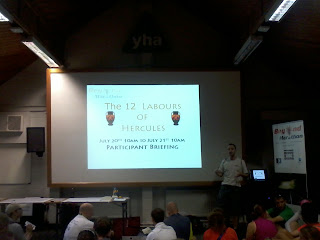 After race briefing it was time to get out and get going. I led the pack steadily out and down the driveway into Castleton at around 4.30 per km pace and found I had a fellow solo runner also doing the same leg. Luke mentioned he had a calf problem recently and didn't sound too optimistic but was keeping up as we ascended and reached our first control. We both went for the short 2 mile into the cave next and ended up missing the cp and going all the way into the cave, oops. In the cave you had to retrieve water from the cave and carry it back to base where it was tested with Litmus paper to check the PH!! Once we got out of there it was on to a longer one at cp 9 which it seems most of the field had gone for and were now returning. We had to carefully choose (Ie grab the first one you see) a belt hanging from a tree deep in the woods near the tip of Ladybower Reservoir and return to base. 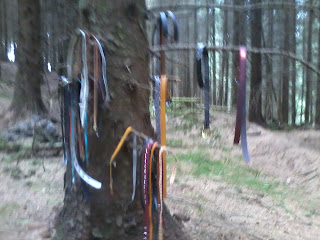 That was basically the last I saw of any other runners apart from passing them in the opposite direction for hours, although I enjoyed just running my own pace and ticking off some of the longer cps. The labours varied from Archery, Origami, Spear throwing, memory games to simple collect an item and return to base. It broke the running up nicely and it never felt like there was a long way to run as at most you were 10 km away from either a labour or the main checkpoint. 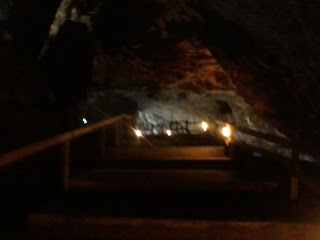 We visited some incredibly cool points and some I'll definitely go back to. After cp 9 I did number 1 and then had a spot of Archery to do (I'm  glad my running isn't as bad as my archery!) then it was off to get number 8 which had a slight gradient but passed by quick without much fuss. After a quick look in the big hole a mile or 2 out the top of Winnats pass I set off back. The return leg was quite fast and I was moving well. 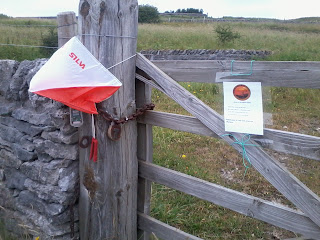 Next stop cp 10 which involved a climb up Mam tor, along the ridge passing Lords Seat and then down towards Booth to an orchard where an apple had to be retrieved and transported back to base, piece of cake! I think next I went for 11 which would mean I'd done the first half and ran up through Cavedale towards Peak Forrest, If I remember rightly the route followed the Dusk 'til Dawn route to where the first checkpoint was before turning down a cobbley track for a real test... after reaching the cp we had to run up a further 200m to a list of 8 birds names stapled to a post, remember them all and return to the cp and recite them... Albatros, Pheasant, Peacock, Pigeon, Hawk, Eagle, Dove, Stalk... I couldn't get the list out of my head for the rest of the race!! Next we were given a piece of paper and had to make a bird from the paper and take it back to base to have it graded (I think mine got 4/10 so no prizes for me!)

After that I headed out for an area I didn't know which was just above Bradwell at Robin Hoods Cross. For me this leg just seemed like hard work, I'm not sure why, perhaps I was just a bit warm but looking back at the results I wasn't doing too bad. The climb upto the cp was a bit of a jungle but I found it easy enough with the directions and it was back to base before hitting Lose hill before sunset. Quite straight forwards except a surprisingly big descent down the other side to collect a miniature cow before returning back to base in less than 40 minutes. 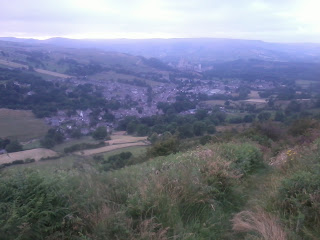 This was quite a nice point in the race as I knew just 20 miles left, two short pretty quick labours left, over Hollins Cross to Edale and then Win Hill summit. I went for Edale first but the cp wasn't where I thought it was and I spent about 5 or 6 minutes wandering around looking for the right bridge, although after that it was a good run back to base and ready for the penultimate cp.

I switched my torch on and grabbed a glowstick before going after Win Hill and caught up with a pair of runners just before the ascent. I was pretty quick up to the top and back with only The Sons Of Sparta Titans being quicker on this leg. It felt good to be back at base but then still 12 miles from the finish!

I set out towards Buck Stone with a pretty good pace although it wasn't long before I'd passed Aston and took a wrong turn somewhere and spent nearly 30 mins running before I got back onto the right path where I was supposed to be. I crossed the river at Bamford and then it was quite straight forward to reach the car park below Buck Stone, ready for some spear throwing. To be fair I didn't do bad at this considering i was throwing into the darkness. A quick trip up a bit further to some rock before returning back along the same path towards Bamford. Another little detour (bugger) before finding the road I needed. I put a bit of effort in here and managed to hold just under 8 min miles with some musical assistance back to the finish! A few tired runners and spectators came to life and congratulated me and I could relax! It was a little exciting running back towards the finish as I had been away for a couple of hours I didn't know what position I would be, I was surprised to hear that no teams had made it back yet.

At the finish all the crew were super helpful getting warm food into tired runners (It was a 10am start so just after 2am when I got back) they seem to like this finishing in the dark business! 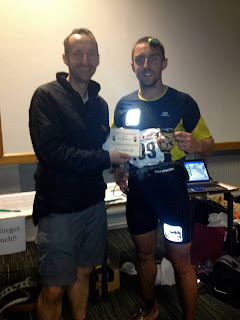 A huge thanks to Richard and Wendy and the team for putting on a super event totally different from just another ultra. My only reservation about running it was the fact that I had Lakeland 100 5 days later. (I was certain they were 2 weeks apart when I booked) Beyond Marathon are holding some great looking events next year like the Double or Nothing, Dusk til Dawn 50 mile and it's rumoured a rather long race around both white and dark peak areas, it may even be 100 miles?!!?! You best check the website out for more information. It was great to meet some new faces and catch up with people from all over the place!

Well done to all and see you at the next one!