Having worn the S-Lab 12 pack from Salomon for over two years now, I thought it was about time I wrote a proper review on it! For once this is a review written after I've being using the kit for a while rather than my more normal reviewing something straight after it comes out of the box. This has pro's and con's. The good news is I can give a fair and unbiased review not based just on 'how shiny' something is. The bad news is the world moves on and the version of the bag I am reviewing (the 2012) model, has since been replaced by Salomon by a newer sexier black and red version! But such is life.

This is a pack designed for ultraruning by ultrarunners.  Where as most packs and hydrations packs are basically a bag with a couple of straps on them designed to tie onto the runner, this pack is a waist coat which moulds around the runner's back to make it as comfortable as possible. So much for the blurb. The reality though is really not a million miles away from this. The pack really does just slide on like a waist coat and unlike with every other pack I've worn, I've never had any significant chaffing or rubbing with the S-Lab 12. The pack is secured at the front with two adjustable straps and the shoulders can be tightened for a more secure fit. The elastic reaching round to the back pockets can also be adjusted. I've worn the pack for up to 60km whilst running and well over that whilst using it on bike rides (for which it works really well) and never had any issues at all. The pack does what it says it should, but as with all these things there is a little more detail to go into first. 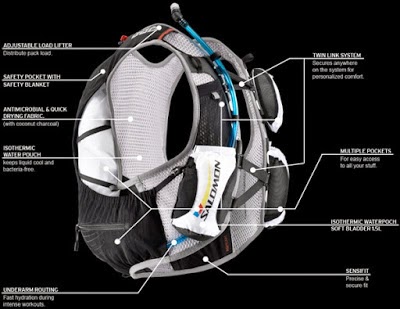 The pack has three points for carrying water. Two water bottle holders in the front and a camelback type bladder in the rear. The water bottle holders on the shoulders hold the water firmly in place and cope well with my Ultimate Direction 26oz bottles. The pack in the rear (which is a Salomon designed pack) comes in its own insulated pack (shown below) and has a click in system which allows you to disconnect the drinking tube from the pack and take the bladder out to refill it at aid stations. No more pouring water into the bladder, missing and getting all the kit in your pack wet. This click in system worked well for the first 18 months of use, however recently it developed a leak at the base of the bladder by the disconnect system. This can be replaced without too much effort but the bladders are not cheap, coming in at £35 a hit. Another minor gripe about the the water bladder is that though it's slide in/slide out pack is insulated, this insulation doesn't work that well, the water after an hour or so of running is normally at body temperature. Liveable with but not ideal.

The actual space within the pack is well thought out. A large back pocket, which can be divided down into two parts, two easily reachable side pockets and between the side pockets and the back of the pack the elastic which holds the pack snug forms two more unzipped pockets, ideal for throwing rubbish into until you get to the next bin. On the front of the pack there are removable mini pockets (shown below) which can be swopped in and out, as well as a very handy key holder. The only bug I have with all the pockets is that rather than have decent ties for the zips Salomon have gone with little bits of string which come off very easily. These I have replaced myself, but on a £150 pack this seems to be money saving where it isn't needed.

The pack when it first came included bits of elastic for holding walking poles in place. I never managed to work out how these were meant to work and after a while they got chopped off as it just felt like there were just getting in the way. I know other people have used them successfully. The pack also includes an integrated whistle and survival blanket covering a lot of ultraraces entry requirements. (Just remember to take the blanket out before washing the pack, which incidentally seems to have no issues with being put through my washing machine!)

The gripes I have about this pack are minor. To answer the fundamental question would I buy it again, the answer is yes, straight away. Compared with my WAA Ultrabag it is far more comfortable to run with and I wish I could take this on the Marathon Des Sables. (The limited space available in it dictates I can't.) For all the races I have coming up, with the exception of the OMM this is the bag I am going to be wearing. This was the first major investment I made in my foray into ultrarunning, two years later I still don't regret it.