Written by Chris Ellyatt for the URC

I’m sure that we have all seen a thousand articles on how important rest is to any athlete’s schedule. Indeed, it has often been described as the ‘low-hanging fruit of recovery’. To the ultrarunner, however, the idea of an extended rest period can be about as appealing as a post-100 foam rolling session. With that in mind, I would like to share an anecdote of my recent experiences and how they illustrate the importance of strategic rest periods.

So it’s now the end of September, and I have just come off the back of my best season so far as a runner. At 24 years old I am still very new to the running scene, even more so to ultras. With a concentrated effort I have managed to drop my 10k time by 3 minutes in one year, and completed my first 100k and 100 mile events in a single season.

Even with my supposed fountain of youth, these kind of gains in a single season are simply unsustainable for the majority of athletes. Undeniably, all one needs to do is take a look at the history of the Tour de France to see the lengths athletes have previously gone to in order to maintain season-long efforts.

As I write this piece, I am lying in bed with a serious case of man-flu. It is well-known that extended high-level training will almost certainly impair the immune system, and even being a 20-something year old offers only limited protection against it.

If you are running throughout the year with a particular race or set of races in mind, I highly advocate a reasonably lengthy rest period after the race season is over. Whilst I imagine one could run and stay fit the entire year round if done properly, the ravages of racing hard demand time for the body to fully recover.

I had noticed that after my 100k in June, aches had suddenly become twinges, and early morning sessions became immeasurably harder to get up and do. In fact, I think that one of the easiest signs to spot of over-exertion is how long you want to sleep for. An increased desire for sleep is the natural response to repair and growth of our bodies – just look at children. This anabolic activity is the only time our muscles, nervous system and immune systems can truly recuperate and potentially improve. You don’t get stronger during exercise – you get stronger during sleep.

I could see all these little signs increasing through the summer. Yet, of course, having already committed to my first 100 mile race, I moved towards the North Downs Way 100 in August with absolutely no intentions of a DNS. Aches, tweaks and general fatigue were easy to dismiss as I compartmentalised my thought process. I am sure this is easy for many ultrarunners to relate to.

I completed the race and achieved my goal of sub 24hrs – just. Unfortunately my body was clearly not ready for the stresses I had imposed on it, and I spent the next 3 days in hospital recovering from rhabdomyolysis (severe muscle breakdown). I genuinely think that had I used ibroprufen during the race, it would have been the last straw for my kidneys in this situation. 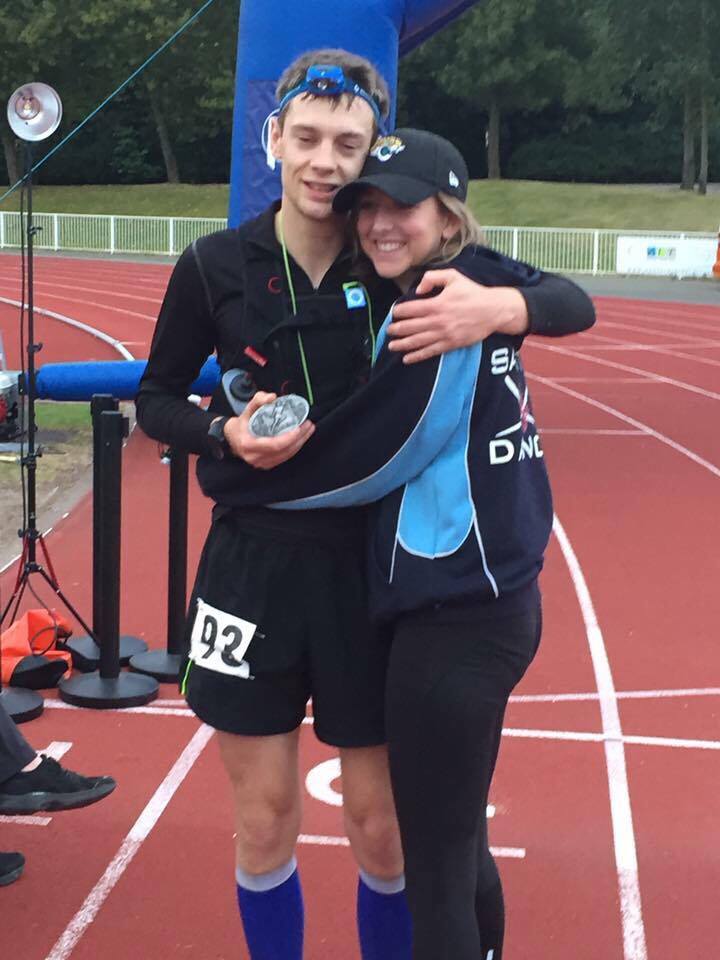 Not looking so great after the NDW100. This is when you have to listen to your body.

It took around 2-3 weeks before I could ditch the crutches. Although I was in quite severe pain from the scar tissue, it also became quite apparent to me that the huge amounts of opioid painkillers I had been prescribed had become a replacement for running. Luckily I managed to wean these down quite successfully and finally got off them.

What I should have done at this point was take 3-4 weeks off and completely rest my mind and body. But such is the mindset of sportspeople, I was back doing core sessions before I even had my broken foot out of its cast! It is amazing how you can justify these things to yourself once you start imagining all your fitness seeping away from you.

The reality is that your base fitness takes months, perhaps even years to be truly lost. A month or two after a hard race season will be far more beneficial than trying to maintain a training schedule. It is also an opportunity to relax and appreciate the other parts of life which we so often ignore. I often think that we can be somewhat blind to the obsession we have in this sport, and it’s not unfair to say that this can damage relationships with others. Maybe that’s me projecting!

So now, sitting here with a battered immune system and feeling pretty exhausted as we head to winter, I’ve come round the realisation that it’s not an ‘impressive’ feat to keep training regardless. It is simply unbeneficial and tactically poor.

I’m not entirely sure how useful this anecdote is, simply because if I had read it at the start of this season, I would have done exactly the same thing regardless. It takes a true hammering to actually realise that athletes go on about recovery for a reason! But if it helps just one person to reconsider their post-season recovery strategy than I will consider this as useful time spent.