Rather than driving up to the Lake district with a more than likely 7 to 8 hours journey, we had made the (sensible) decision to get there by train followed by a bus. So after 5 hours of smooth travelling we arrived in Keswick mid- afternoon Friday 3rd October. 3rd October happens to be our wedding anniversary and what a better way to celebrate than a mountain race?
The weather was a bit gloomy but Keswick looked like a cute and peaceful town with tons of shops dedicated to mountains trek and trail running – true paradise. After checking in at our B&B (which was lovely by the way) we headed to the town center and browsed the multiple mountains shop looking for temptation on how to spend money on gears we probably did not need.
We then headed for a quick pint to a lovely pub before going for dinner to a (relatively) posh restaurant. The food was great and after delighting my papilla with delicious lambs we went back to the B&B to get a good long night of sleep.
The night  wasn't so long after all as we got up at 3.50 am to eat a bite. Looking by the window revealed the most unappealing weather ever-  It was pouring rain and as far as I could see the ground looked pretty soaked. Laureda and I discussed at length whether we should wear our waterproof trouser or whether it was best to just be in short. In the end, the consensus of opinion was to wear all waterproof gears we had available – and this included our dish-washing gloves.
We headed off the door in the horrendous weather. It took about 2 mins heading to the start line for our shoes to be totally soaked. One of the footpath was completely flooded and we had to go through. Well, it was going to be wet sooner or later anyway.
The race briefing was short as everyone was packed under the front rooftop of the venue. For sure there was no one elbowing his way through to the start line. 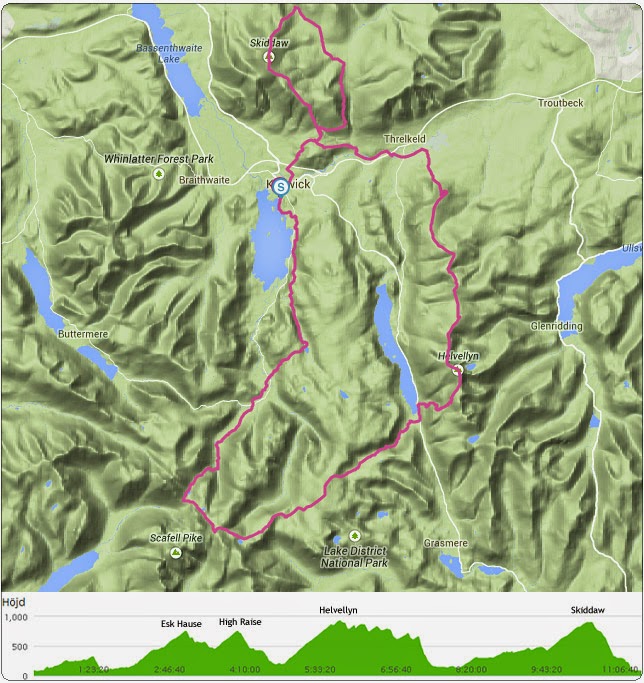 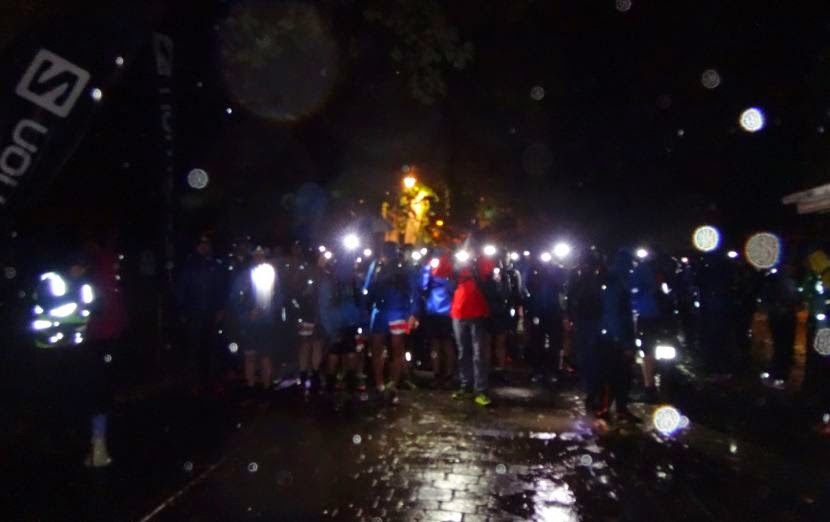 At 5am we all headed off into the biblical darkness. The first few miles were supposed to be rolling and I had counted on the fact we would be making good ground. How wrong I was! I could not tell whether we were running in a river bed or a trail.
There were multiple sections where we had water up to our knees for quite long stretch. I saw a few people picking the wrong line and ending up in a hole with water up to their shoulder. These conditions dramatically slowed our progress but I was thoroughly enjoying it. I was not cold and my hand were dry. I have this thing that if my hand are nice and toasty then I feel ok with the weather. If not, it usually feels pretty painful… 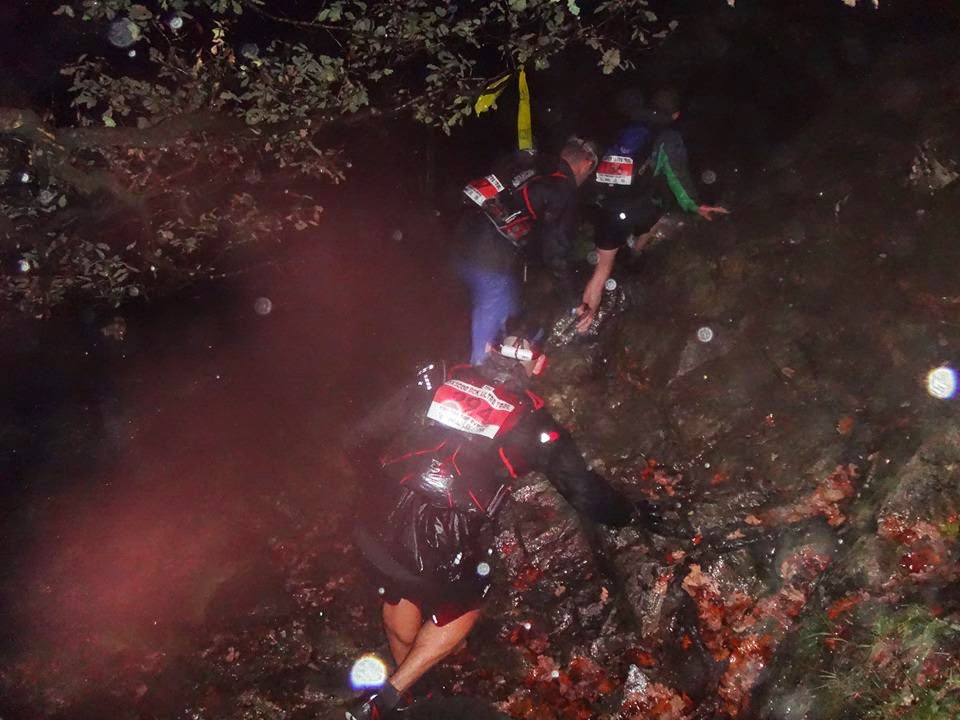 After two and half hours of slogging through rushing water and flooded trails, we finally reached the start of the first climb (Scafell Pike) as sunrise was finally here. 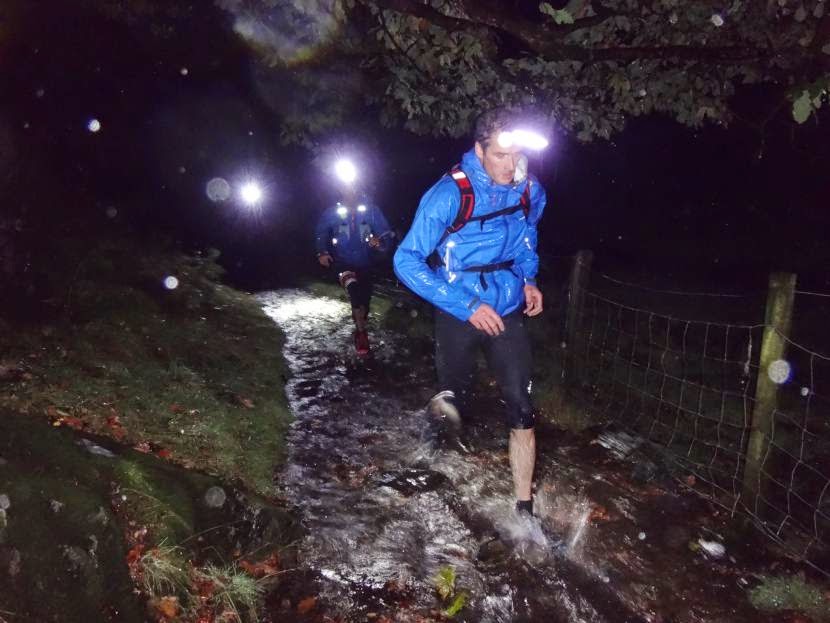 We were marching through solidly when I realised we were not going to the pike itself – and I then connected the dot as to what the RD said in the morning about one of the peak being too dangerous.
Instead we went around. I don’t think we missed much in term of sightseeing as it was foggy and visibility was as good as in a cow's ass hole (French idiom).
We were moving well and passed High Raise without much fuss. By that time the weather had started to clear up and it almost looked like the sun was going to pierce through the clouds.
We then reached the 1st long downhill of the day in direction of CP2. The downhill was quite technical and the rain had made it very slippery. In spite of this we were making good ground and regularly passing a few people. About half way through the descent I heard Laureda screaming . I was about 30 meters ahead as I stopped and turned around to see her on the ground holding her ankle. My first thought was “oh shit she broke her leg!”. But then she said she heard a pop which I thought may be a tendon. In any case she stayed on the ground, in the mud while crying. Few runners were coming and stopped to ask if she was ok.


I tried to put her on her feet but she could not bear any weight on it – that was bad. Very bad. After a few minutes of calming down and more people stopping to help. We decided that our only options was going to get down anyway. Someone told us the next checkpoint was “only” 2 miles away at the car park where Laureda would be able to stop and get a medic to look after her ankle.
We started going down but each step looked very painful and the difficulty of the terrain made us moved at an incredibly low speed. I held her on my back for a section but it was quite risky as I almost slipped on muddy grass and wet rocks. She had no choice but to go down using her sticks. It took us almost one hour to cover just over a mile…
We finally reached the road where some volunteers from the CP was coming our direction to help. Laureda got into the van while I hurried up and run the last mile to CP2 as fast I could. 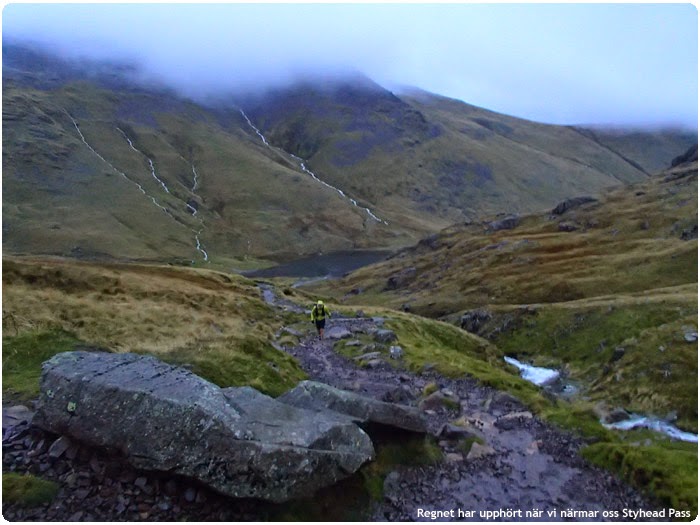 When I got to the CP at the car park, Laureda was there sitting in the van. Her ankle not only looked swollen but a big vein was popping out on the side – looking quite painful. A doc was looking after her so I started taking care of my business by eating and wanted to fill my water. As it happened they had run out of water and were waiting for some other volunteers to re-supply. I was pissed off about this and wondered how on earth they could not have water… I was not going to hang out there with my empty flasks!
I took the water Laureda had left in hers and took off after kissing her goodbye.
The climb up to the top of Helvellyn started immediately after leaving the CP. It was a nice ascent, relatively steep as I like them (there is nothing worse than douche grades).
I over took quite a few people during the ascent and half of them asked me whether Laureda was ok. I got to the top in less time than I thought it would take. There was gale force winds but at least it was not raining anymore and the visibility was good. The sun was piercing through some clouds and the views were magical with rainbows forming in multiple places.
For a while I ran on the ridge – it was a nice mix of up and downs that really reminded me of Brecon Beacons in Wales and the race we did a few weeks ago.
We then started the descent in direction of CP3. Time went by fast as I chatted with a French dude – funny thing is that we spoke quite a bit in English before realising that we were both French.
The last part of the descent was very steep and have I not had the sticks I would have fell several times. There was definitely lots of butt sliding going on there.
The following section was pretty flat and I grabbed this opportunity to push the pace. I am not sure at what speed I ran but it felt fast  (although I am pretty sure I never got below 9mins/mile).
There was a unexpected feed station (added because of the weather) which came as a nice surprise. Shortly  after this (if we consider 5kms being short), I got to CP3 – CP3 was going to be CP4 as we were looping to go at the back of Skiddaw to then climb to the top and come back down to the feed station.
I had in mind that this loop would be very quick. At least it did not look too impressive on the map. Oh boy I was wrong. It took forever to go around Skiddaw.
I could see the top and was wondering when the path to start the climb would start. Instead we were going round…it drove me crazy and for the first time of the day I was very hot.
The only thing that kept me from slowing down at that stage was the fact that I regularly took over on runners and every time I acquired a new target, I made game of catching him/her up within a timeframe.
I then got to the turning point, where the climb to Skiddaw started straight up. It was steep and I put my head down working as hard as I could. I caught on a few runners when a sudden hail storm hit hard. There was gale force wind and the hail was slapping my face. I kept pushing thinking that the quicker I would make it to the top, the quicker I will start going down.
Reaching the top was a relief as I started to get tired. From there, it was literally all downhill (about 10kms) until the finish. The descent back to checkpoint was sharp and I could feel my left adductor tighten up making running uncomfortable.
I barely stopped at the last CP. I called Laureda to let her know I passed the last CP and would be at the finish within no time. I pushed on with a couple of guys for the last 5 kms and, after navigating through Keswick town centre, finally passed the finish line.
Laureda was there with crutches still smiling in spite of spraining her ankle so badly. It was a tough, long and eventful day but when I look back I had lots of fun and enjoyed the conditions. I obviously wished that Laureda would have not got hurt…but I know she will come back stronger than ever as she always does. 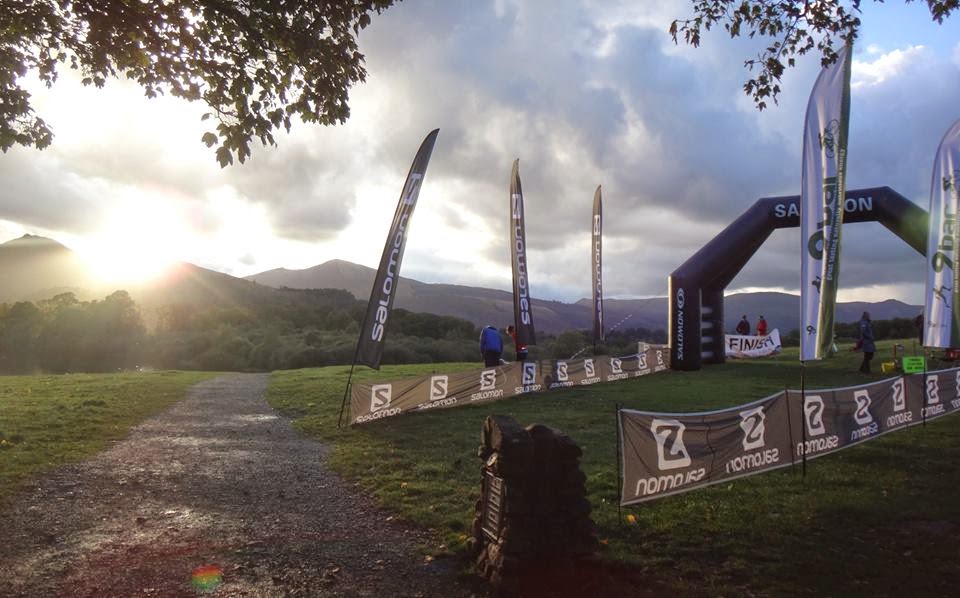 The 3*3000 was a great event, especially considering it was the 1st edition. The course was remarkably well marked and the volunteers were amazing (as ever). There was something for everyone in this race and I will definitely go back there in the future! 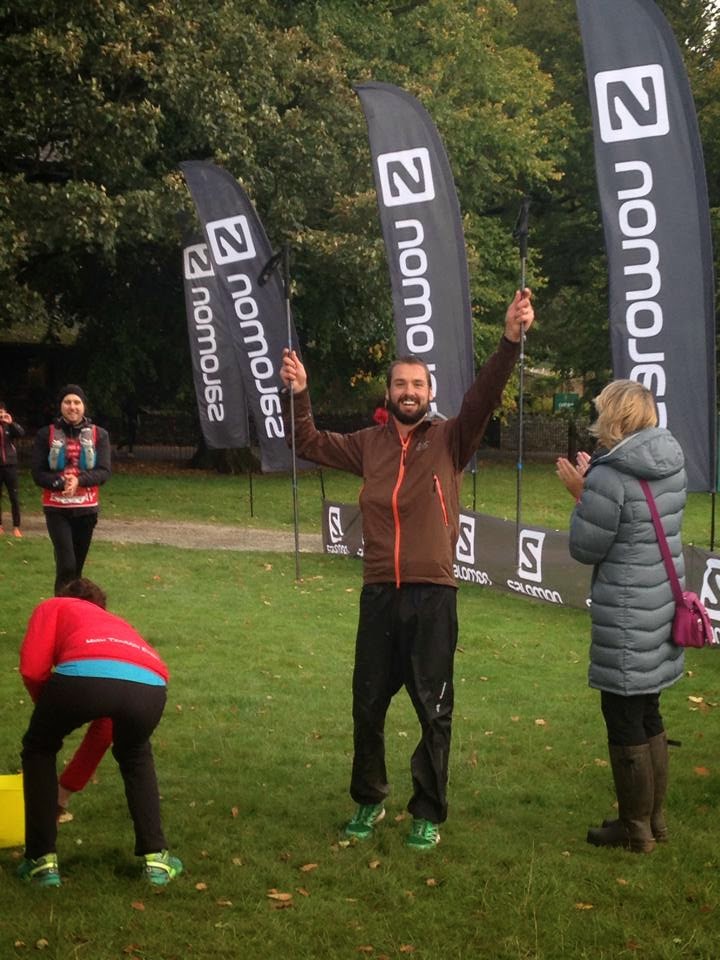 Next stop is the Greensand marathon. Bring it on!
Add comment
JComments