This is my second kit review of Suprabeam products. The V3 Pro rechargeable is the most powerful head torch that Suprabeam currently make and therefore given how impressed I was with the V3 Air I thought I'd give it a try.

Before I start I’d like to add a couple of updates to the V3 Air which I wrote up in June 2014. Since then, Suprabeam have increased the light output on the rechargeable version to an impressive 320 lumens (my review was of the non-rechargeable version), second they have addressed my issue with how easily the headtorch could be switched on inadvertently by introducing the requirement to press and hold down the “on” button for more than 1.2 seconds. This was probably my only criticism of the V3 Air at the time and fixing this issue makes a big difference.

So on with the review of the V3 Pro rechargeable! We all know that there are a lot of head torches out there in an ever growing market and so I thought I’d put together a little comparison list of what’s popular on the market in the more powerful range and roughly what price you can expect to pay vs its output. I didn’t include burn time since it varied on how the torch was being used, and also the format that this information is given varies significantly, needless to say if you put it on full power you’ll be draining the battery rapidly (anywhere from 2-3hrs)!

Before we do that I’m going to insert a small comment about lumens – what are they? Given my physics background I thought I’d let the nerd out here… It’s a measure of luminous flux which is basically the amount of visible light that the human eye can detect. It’s only recently been introduced in labelling of head torches, previously – back in the days when I was using the retro light bulb, we referred to watts (units of power). Lumens definitely provides more clarity with the use of LEDs but for reference a 60W bulb would have an luminous flux of around 700-750 lumens. Hope I haven’t lost you…

Sample of head torches on the market from popular brands:

Ok so this is a quick and sketched reference and I haven’t been able to product test the other ones in the list (send them in if you’d like me to!) but it’s purely to provide some context to the review of the V3 Pro rechargeable. Aspects such as the ability to have the brightest setting with max distance is not always possible on some models. Also note that the Petzl products are reactive, but when comparing constant light output on the Petzl Nao, 430lm is achieved for a distance of only 130m (lower than the 575lm max reactive output). I included Silva’s power trail for a bit of fun, I’m not sure who can drop £300+ (RRP £400) on a head torch (you’ll know if I ever did with that luminosity, I could become a lighthouse!) or indeed some of these designs that weigh in at 1/3rd of kilo. Maybe you have stronger neck muscles!
I tend to favour a rechargeable unit since due to their power usage you will eat through batteries and destroy the planet in no time at all as well as your pocket. But there are situations, such as long expeditions where a power source through solar or otherwise is difficult to obtain, that’s when maybe a battery version is still useful.

So as established in my last review, Suprabeam is a Danish company to watch out for but relatively unknown in the UK until recently. They specialise in producing high quality torches and headlamps.


I really put my head torches to the test day in, day out, both running through the dark streets of London which for most maybe where they use these torches the majority of the time and also out in the wild, running or climbing. For those more interested in the extreme environments I've used them on my ML assessment in Snowdonia, the work I do for Run the Wild and also mountaineering - most recently in the Atlas Mountains in December. The key considerations are always weight, durability, brightness, ease of use, cost, comfort and stability. Head torches seem to be getting ever more powerful and more reliable. Ideally you want something that will stand the test of time, is not too expensive, weighs less than 200g and lights up the path ahead.

Running with the V3 Pro rechargeable in London: 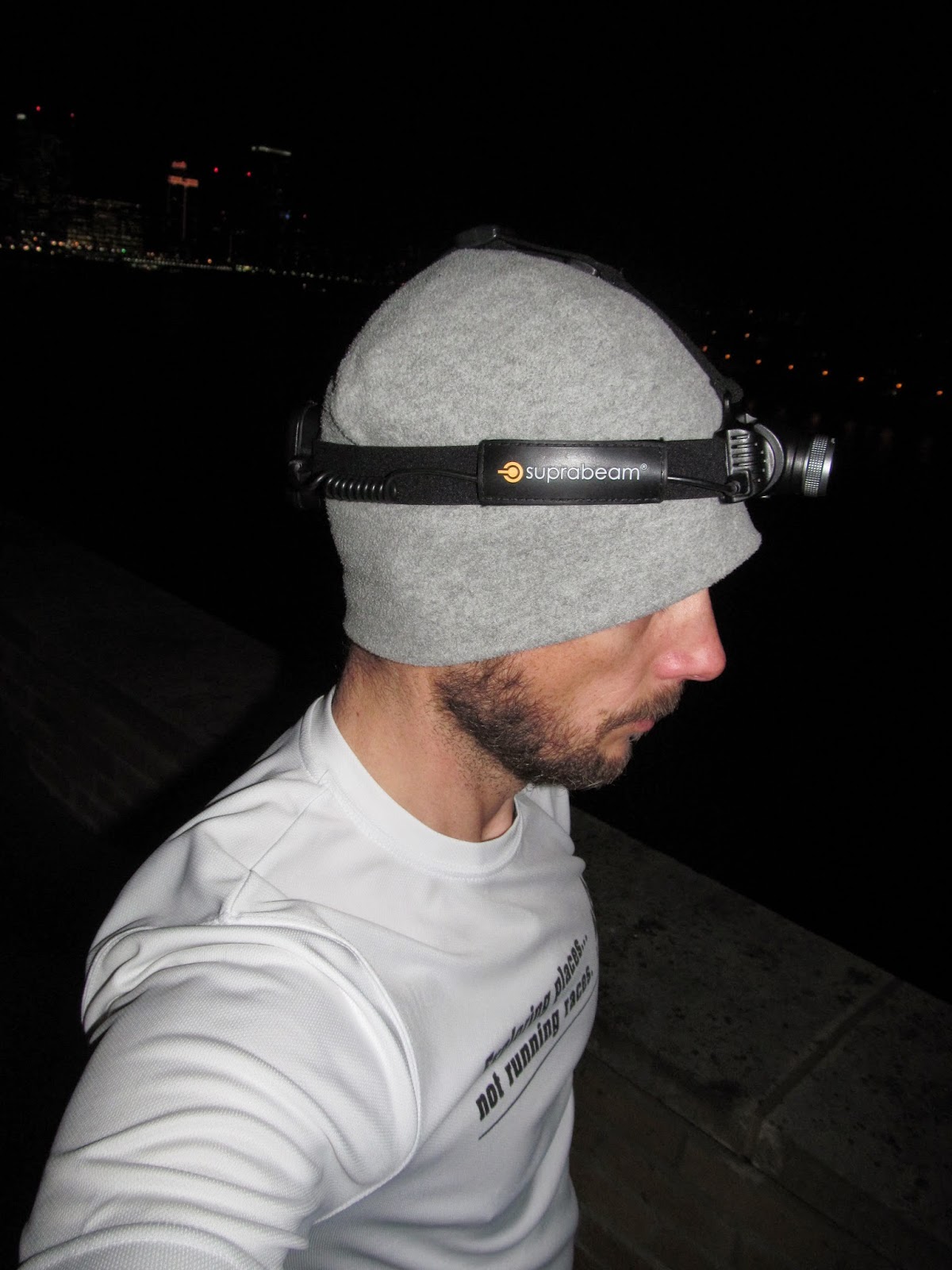 So what does the V3 Pro rechargeable have that the Air doesn’t and how does it stack up against the competition?

The packaging has changed. It now arrives in a neat cylinder and still has a great quality feel when opening it up, it also makes for a pretty handy place to store it. All Suprabeam torches come in brushed aluminium which gives them a quality feel, robustness and keeps them lightweight. The head band feels strong and comfortable, it’s also easy to adjust and comes in different colours to suit your style. 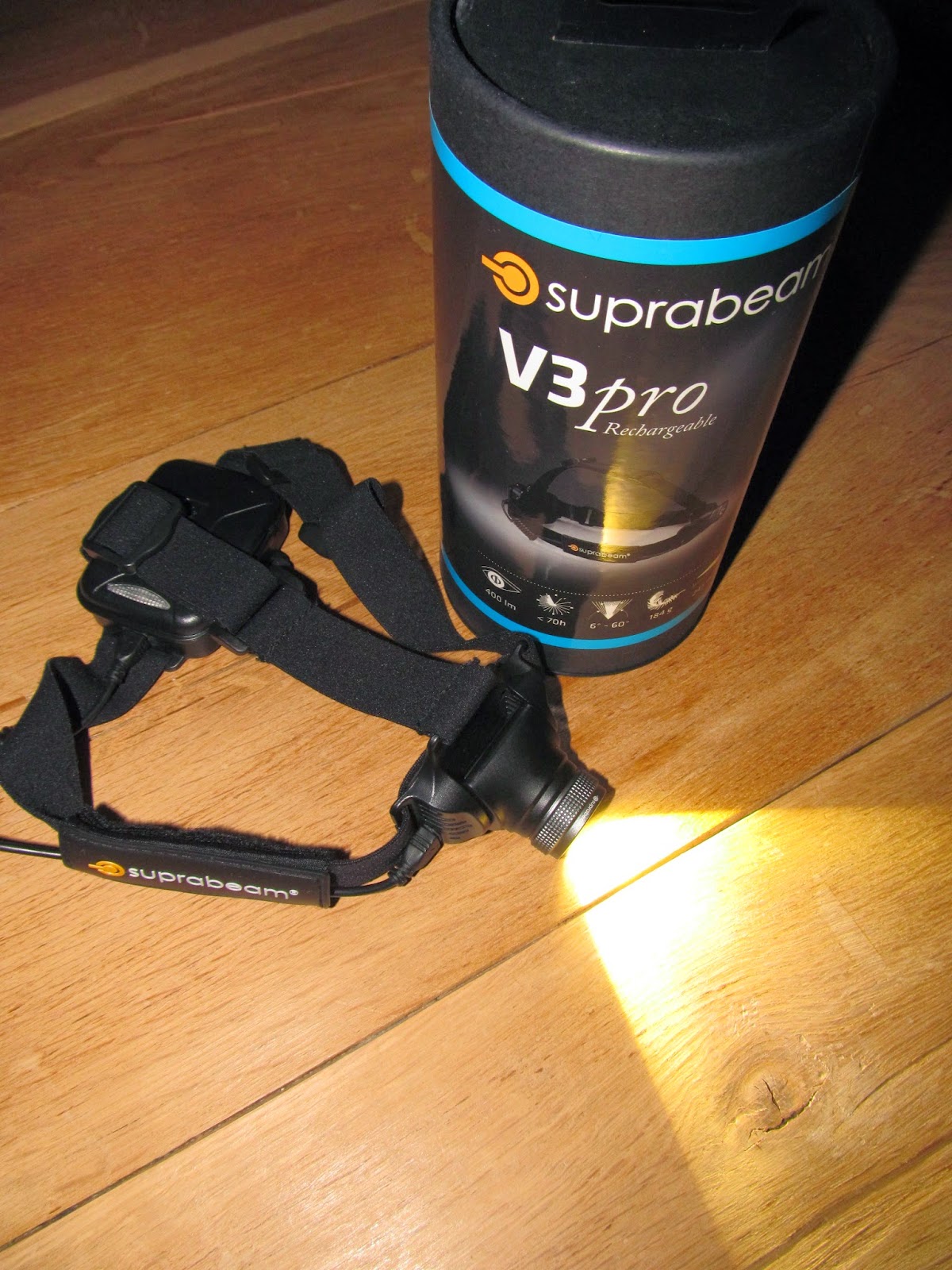 Effectiveness in the dark: (5/5)
My previous review was based on 250lm of the V3 Air so the jump to 400lm was impressive.  In the city I need the headtorch for the following reasons: light up unlit areas, alert other pedestrians that I'm on the pavement and running (all runners should run at night with a headtorch!), alert cyclists who have decided to mount the pavement that I'm there and also to try and alert lorries and buses to the fact that there is someone crossing whilst they jump red lights! So the main purpose on those occasions is basically to save my life and to avoid bumping into people as much as possible. The torch has to be bright to compete with all the light pollution around town. When I'm out on trails or climbing, the purpose is different; lighting my path and spotting any obstacles or hazards or far off reference points, but the need for bright light is the same. The V3 Pro has not let me down in any of these areas, I've run with it every day for 2 months and it's made a big difference. People spot me from further away and I even get the attention of the zombie mobile phone users! On the trails I couldn't fault it. The option to zoom in rapidly to a point in the distance is excellent and although in real conditions 245m can be demanding, the strength of this torch picked out some key features during my night navigations around Snowdonia at around those distances. It compares very favourably to the other head torches in this aspect. 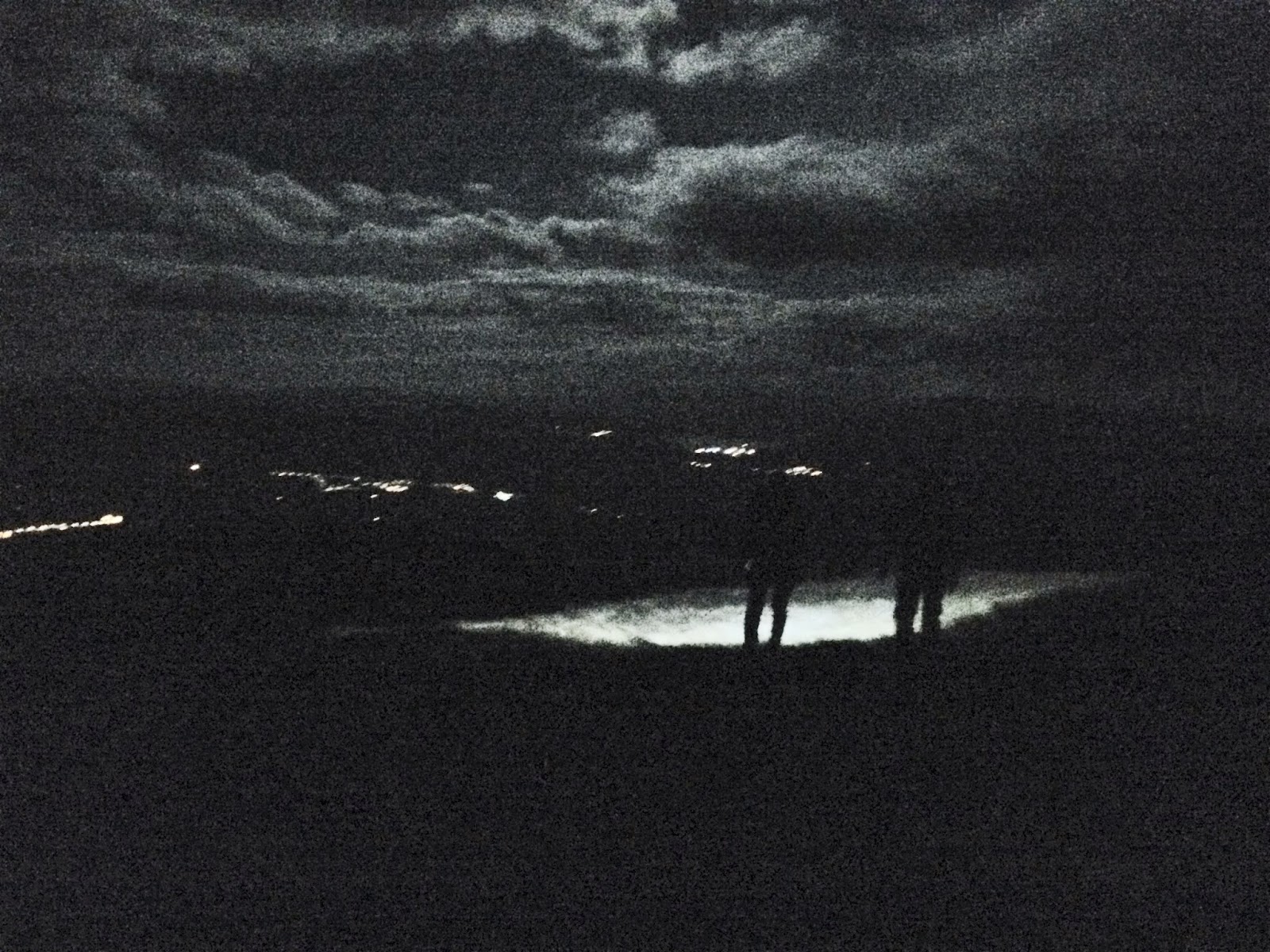 Comfort: (5/5)
It's very comfortable to wear and also the overhead strap provides good stability and comfort, needed above 150g. A headtorch much heavier than 200g is just not very comfortable for trail running, and packing light for the mountains is key. The battery pack balances out the light at the front, and although slightly heavier than the Air version it's not too noticeable. Personally I'm not a fan of putting battery packs in pockets or elsewhere, I just get caught up with even more cables hanging off me so I tend to avoid these designs!

Style: (4/5)
Not much changed here from the Air which is a good thing, it's a neat scientific looking instrument without looking like night vision for special ops. I ran passed a friend the other day and he said it made me look like an adventurer... so I'll go with that.

Durability: (4.5/5)
It's waterproof and has been super reliable. The changes to the way the on switch works, was a greatly needed improvement. Also with the greater battery durability - upto 70hrs expect to get good use out of it. I run with the max brightness and it lasts around 3hrs.

Running suitability: (4/5)
An excellent bit of kit, light-weight, comfortable, stable and super bright with the added bonus of being rechargeable - perfect for regular night running, but a little heavier than the Air. You'll probably be one of the brightest people out there.

Running with Suprabeam headtorch in a 50 mile ultra: 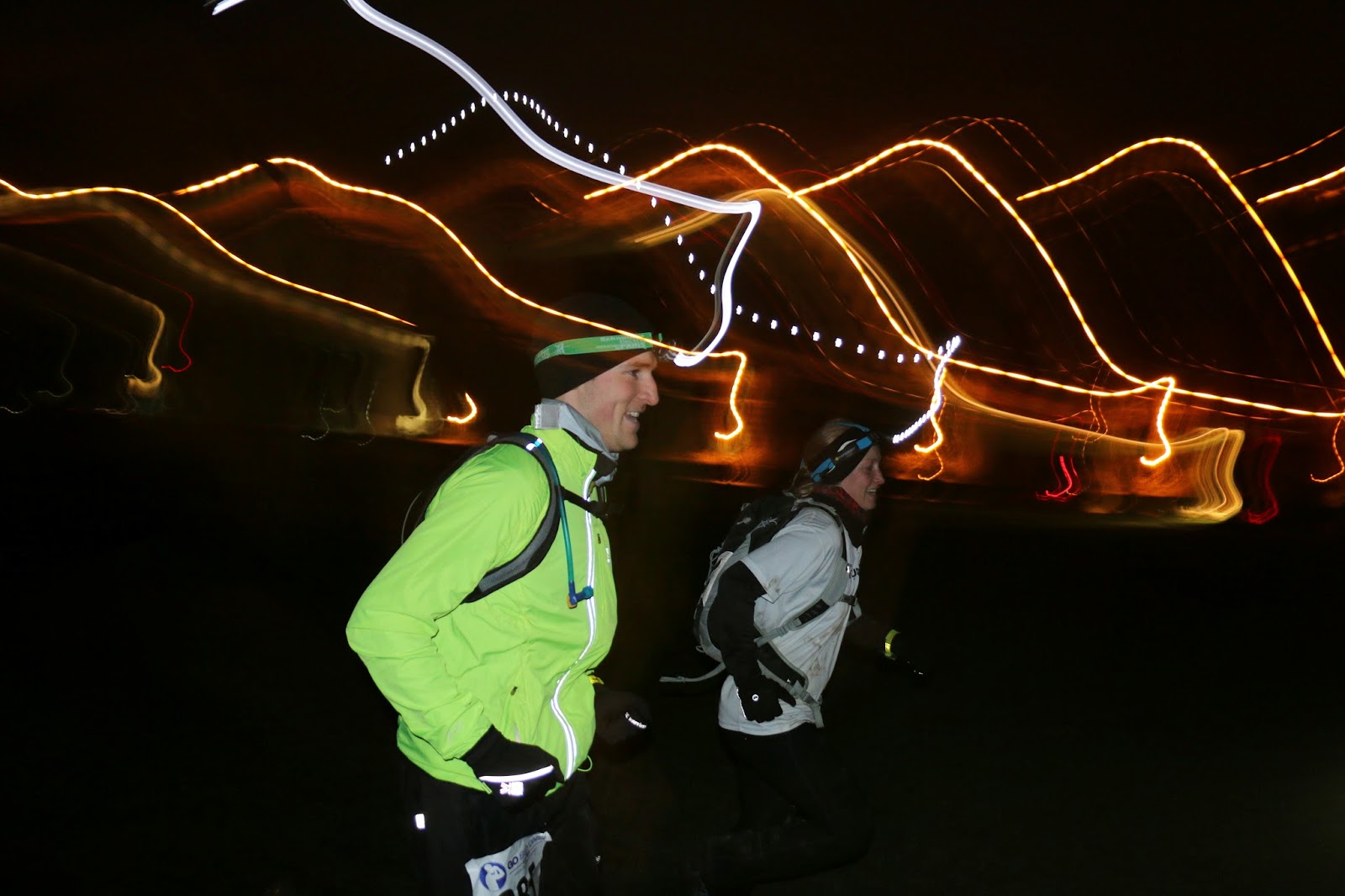 Functionality: (3.5/5)
First the charging is easy, it's got 3 indicators of the level of charge, charges in situ and also uses a USB connection. Second the torch itself. You need to get to grips with holding the button down to switch around on the dimmer, SOS and BOOST function takes a little getting used to but it's not too complicated, I recommend you read the instructions though! This is about as complex as I'd like a torch to get, bearing in mind I'm probably going to be needing it most when my fingers are numb with cold, I'm tired, hungry and slightly geographically challenged - I don't want to be fiddling round with an operating manual more applicable for Windows 8! The focus is easy to operate and super effective. The swivel head, easy to adjust on the go and locks into place securely.

Vs Competitors: (4/5)
This may surprise you but it didn't win! From the table above I still think the Suprabeam V3 Air (r) is the best out there in regards for value for money given its brightness and lighter weight alongside everything I loved about it in my original review. If you need the extra 80 lumens then you cannot go wrong with the V3 Pro rechargeable. It's an extremely well made bit of kit, best value for money given it's quality, brightness and also functionality against other brands, only the LED Lenser beating it in price in this small sample. But I'm still a fan of its smaller cousin, the V3 Air.

Conclusion: A great head torch for the money, but is it worth the extra given how amazing the V3 Air is? It depends on what you want. I think if Suprabeam want to blow away the competition like the V3 Air has in its class, an increased output to 500lm would definitely do the trick.