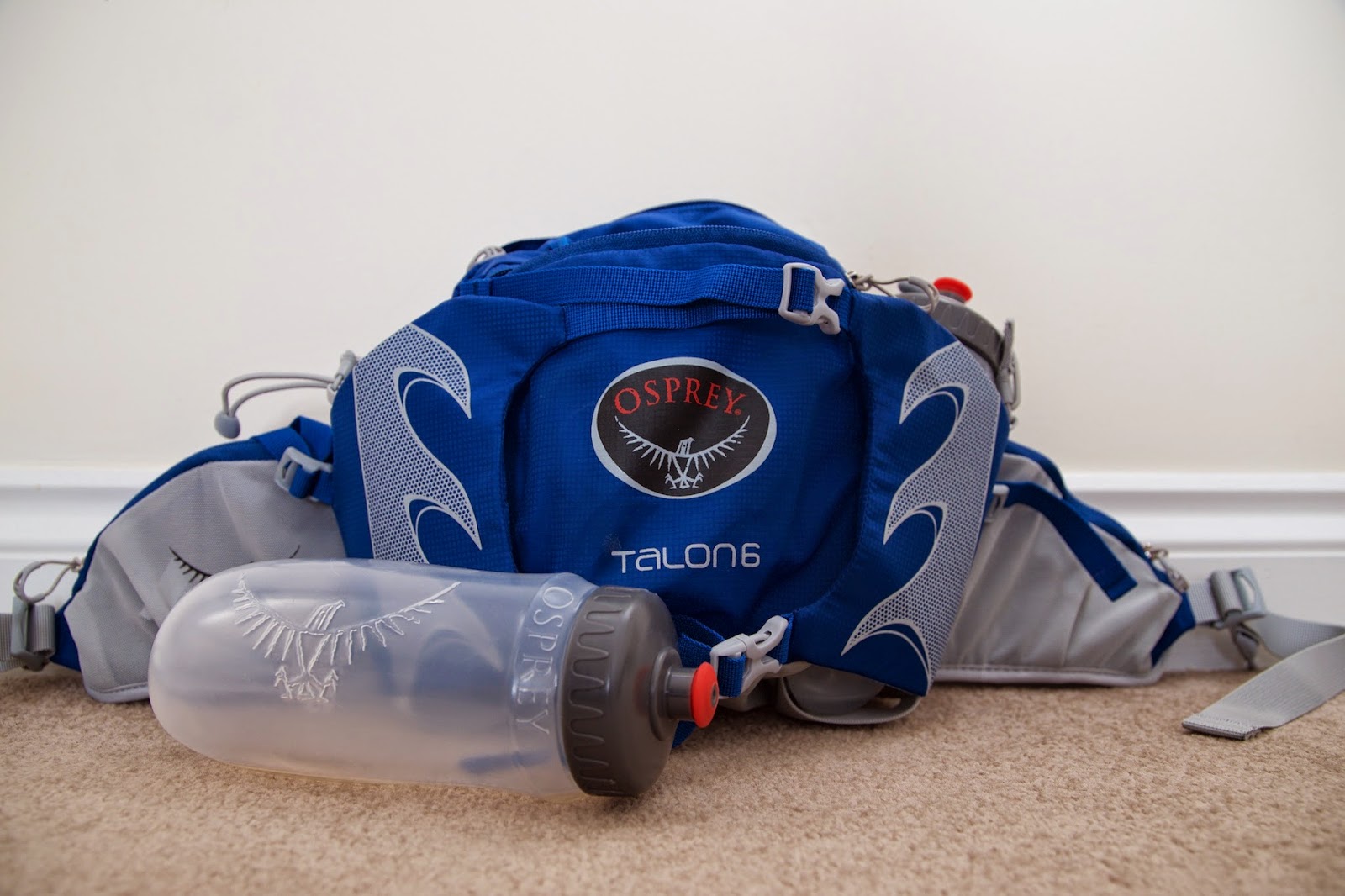 My mate Liz talked me into the GUCR (Grand Union Canal Race). I know, it didn't really take much as after doing a few multi-day races I was very much 'up' for a real ultra, even though we've gone for the short option (50K) and put ourselves down for the 'jogging' pace.

So, in my planning and training for this race I realised that I need a bigger waist pack for hydration and kit. I've used backpacks before but I get annoyed with them and they feel uncomfortable on the shoulders and hot on the back after a few hours of running. I've also used a waist pack quite a lot but my old faithful is just too small for this event but it only takes a 500 ml bottle (plenty for a half marathon) and a few gels/house keys.

I spotted the Osprey pack in our local Cotswold Outdoor store and tried it on for size. Being a smallish female not all packs can be made comfortable, often they can't be tightened enough to prevent bouncing about. This one seemed to feel OK and has lots of space for extra clothing both inside and on the straps outside, a small pocket in the centre for keys (there's a clip too), bank cards, cash, phone etc. There are also 2 mesh pockets for other small items (in my case inhaler and gloves) to be stashed on the straps.

It comes with 2x 600ml BPA free bottles which are loaded either side of the centre, so sit on the hips. They are held in place with straps that fit over the tops and don't bounce at all. This is all good except that it makes it tricky to get them free when running. To be honest they won't move much even if the top straps are taken off. I plan to walk/run so I'm quite happy to keep them strapped in, as when walking it's easy to release them. The bottles are also shaped to sit comfortably - they have flat backs.

As well as the bottle holding straps, there are compression straps on the body to pull the belt unit in and the belt's tightening elements pull towards the centre of the body rather than away. This is a feature I like as it seems to make them easier to tighten on the move. When not being worn, there is a top carrying handle.

First run - only planned an hour but filled both bottles for balance and to get the full effect. Carried a spare jacket, gloves, inhaler, change, phone - all the stuff I might carry on a much longer trek. Strapping the pack on it felt odd as my current waist pack sits much lower and tucks into the small of my back. This sits high and proud. I didn't think that I was going to get on with it for a while...

It bounced about like ‘billy-oh', hitting me in the back and annoying me something chronic. After about 20 mins of this I was not happy. I had tried tightening the straps but couldn't get them right. Time to stop and rethink. Pulling the pack fully onto my waist, I tried getting it closer to my hips, I tightened it further and although it felt that is was riding very high, the bouncing was cured. Up to this point I had avoided raising it up as I felt that it might constrict my ribcage and indeed it does sometimes feel like it might be. However, I was able to run with no bouncing about from the unit for the rest of the run.

Second run - 2 hours worth this time (bottles filled, jacket and top packed along with change etc). Playing around with the straps a bit more I was comfortable from the get-go, this time with minimal movement from the pack for the whole run. In my first run I had thought that this pack was not going to work but after today's run I'm convinced of it's worth.


In truth this pack is designed for hiking although Osprey do say it should be comfortable if you want to break into a little jog. I think that they may be underselling themselves a bit here though as I certainly love running with it now that I’ve experimented and managed to get it to fit properly!