L'Echappee Belle, which means The Pretty Escape, is a 144kms race with 10,900m of vertical gain. The race is crossing the entire Belledone mountain range. The Belledone range is known to be on of the rockiest and gnarliest in the Alps. But also one of the most beautiful. The race starts in Virile (beside Grenoble) and ends in Aiguebelle. You can check it out here. 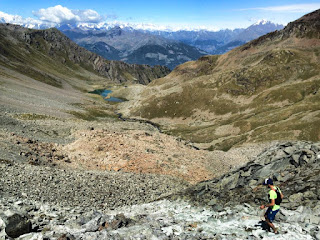 The week before the race, Christophe Le Saux had invited us to join him in Gimillan. A little village in Aosta valley [Italy]. We stayed there for 6 days to train and discover the beautiful surrounding of Gran Paradisio glacier. We logged some solid training days with lots of vertical and pretty sights. But more importantly, we had tons of fun hanging out with Christophe, Djanina and Carlos Sa. Aosta is so beautiful and the network of trails is incredible. I strongly advice to read Laureda's post if you want to find out more details about what we've done and the stunning mountains we've been up to.
Also, special mention to my mum who drove us there and then came to pick us back.


The few days before the race were spent chilling out, eating a lot and drinking beers. The best preparation for a long race like l'Echappee!
The day before we drove down to my sister who lives in Voiron (close to Grenoble) and therefore not too far from Vizille - where the race started. We stayed overnight at their place. The evening was spent doing my bag and checking I had not forgotten anything in my drop bag. I also had my mum and Laureda to crew for me which was a nice change as usually I have no support during races.

The morning of the race we got up at 3.45am, eat a good breakfast made of egg and avocados before heading to the start in Vizille. 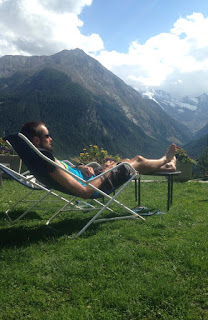 The start was buzzing with people taking advantage of the free breakfast while others were nervously waiting. That's when I bumped into Manu! A guy living in Chambery who had been in Peru and Bolivia with us. It was so nice to see him. And totally unexpected as he is not on social media - made it even nicer to see him.
We chatted for a while before making our way to the start line. At the start line we also saw Patrick and his wife Lolo who we had met in Andorra last year. Patrick had finished la Mitic just behind Laureda.

After saying goodbye to my mum and Laureda, plus a quick briefing from the RD, the gun went off and we started running the 2kms of flat road leading to what would essentially be 3000m of vertical gain. The first 10kms or so were on relatively smooth forest path. I enjoyed these and tried to cover good ground knowing these wouldn't last.
Another 6kms or so of mix of jeep and forest tracks took us to the 1st checkpoint. I stopped briefly to re-fill my water and eat a few bites. 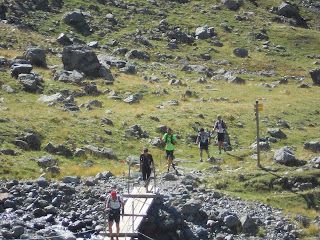 From that point things started to get a bit more serious. The rocky single track I have been told about started snapping up and slopes grade got more serious. I was still feeling well, climbing in my confort zone. The plan had be to reach Croix de Belledone (the highest point of the course) 'fresh' (or fresh enough). There was one more checkpoint before reaching la Croix de Belledone - Refuge La Pra - where my mum and Laureda waited for me. I stopped 5 minutes to eat. Laureda got my water filled and off I went. It was starting to be really hot although we were getting higher up so every time I crossed a river stream, I got my buff and head wet. Better wasting a bit of time and keeping cool than over-heating and blowing up!
The downhill section to Col de Freydane was rocky as hell. And so technical too! Running was made difficult and sliding on my butt became the new norm.
I was already looking forward to get to le Pleynet - the 1st life base at kilometre 60 although I wasn't halfway there yet. There was two main challenges left: Le Pas de la Coche and le Col des Vaches. Both were very challenging, rocky, gnarly and steep. The heat wasn't helping. I had a minor set back in le Col des Vaches going through a mini bonk. Luckily I could recompose at the Lac Noir checkpoint where I sat down for a few minutes and eat a nice noodle soup that re-charge my batteries. 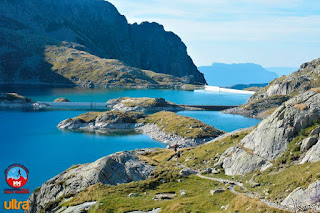 I then started the relentless downhill to join the Pleynet (which is a resort). It was really frustrating to get there as we had to go all the way around with the illusion to arrive at any moment. I finally got there with a little group of three friends who were sticking together.

I was so glad to be at Le Pleynet as I had planed to stop there for half an hour. The idea was to really take the time to 'recharge' and start fresh again. Indeed what was coming was gruelling: a first climb of 800m. Then a descent before starting the 1400m ascent to col Moretan. All of this at night.
I didn't stay the full 30mins as I wasn't hungry. I drank a lot of sparkling water, down my protein drinks and then took a dump. I also changed shoes, grabbed some food and then took off. Some runners were running the race as a relay. Thus the second part of the relay was starting at the Pleynet. It was cool to have those runners over taking me and spending a few minutes chatting. They all told me I looked good and was still climbing well. I knew they were lying since I was struggling and nightfall was rolling in fast.
I got to Refuge de Gleysin (another CP) around 10pm. I was very hot. Probably because we had dropped below 1500m and I couldn't wait to go back up. I would soon bite my lips for that wish. This was the long ascent of 1400m leading to Moretan pass. I would divide the climb in 2 parts: The 1st one is steep (with some grade above 40%) but there was still a path or a track. While the 2nd part is just pure evil. Not only it's steeps but it's just big blocks of rocks. I had to stop a couple of times and sit down while trying not to fall asleep during this nightmare ascent.

The descent on the other side of Moretan pass wasn't more pleasant than the ascent. In fact it got a lot more scary as I kept falling over. I opened my elbow and really hurt my side as well. Just when I thought it was getting better I slide on a mix of ice and mud and ended full of mud. My poles were useless to keep me up and I had to rely on the rope. I could hear the guy in front of me yelled in pain when falling as well. 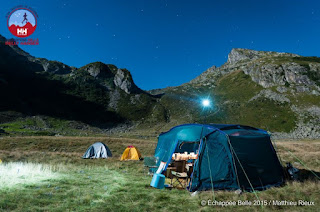 After what seemed like an eternity, I finally emerged on a flatter section. There was a guy who just woke up and started moving again. I was trying to run but it was so technical that it was impossible to  put two steps together. I ended walking with my new comrade complaining about the route the organisers had chosen. We got to the long awaited CP and I sat down in the tent while sipping on a warm soup noodle. It felt good and I tried to delay getting back out there as long as possible. Ultimately I had to go and I left at the same time than another runner. In hindsights, it was a great move as we would get each other to Super Collet, which was only 10kms away on paper but a long way in reality, Chatting about other things made the journey a lot more enjoyable and helped both of us to reach Super Collet.


I arrived there at 3.45am. I was expecting Laureda and my mum to be there waiting for me. I was a bit concerned when I didn't see any of them. Especially Laureda since she was supposed to pace me for the last 47kms.
I thought I would get my stuff ready and eat as much as I could while waiting for her. But I was a bit cold and somehow wasn't doing much. I kept faffing around. I was going to lay down for a bit when Laureda finally showed up with my mom. I had already been there for 15mins and I wanted to leave. I asked them to get my things ready while I was going to go lie down for 10mins. I did not want to sleep but thought it would do me good to rest (like I did at La Ronda). The thing is that I was very cold and I kept shivering so not really relaxing. After what seemed like an eternity (9mins in reality) I got up and warned Laureda that we would be departing in the next 2mins. I got a bit more food in and  we left. I trusted she would get me to the finish line no matter how bad I felt. 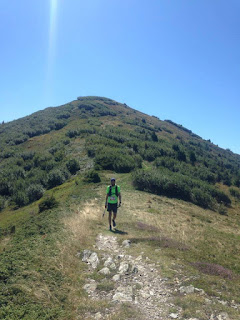 The following 10kms were tough. Up, down and up again. The last uphill before reaching refuge Valpelouse was endless. Laureda was doing a great job at entertaining me though. She was telling me what they discussed with my mum, things I would have not care about too much in other circumstances but right there, right then I was happy to have distraction. I stayed a lot longer in Valpelouse CP than I anticipated. I needed it. I was crushed. After 25 mins I pulled myself back up again and started the climb. It was less rocky from there on but it didn't matter at that point as I was just trying to put one foot in front of another.

But I knew I was going to make it to the finish. I was only 30kms away and even if at the time it seemed like a lot, the biggest challenges were behind me. I was telling her how much I wanted to quit whenever I wanted Laureda to tell me I was going to get there. And it worked! We arrived at the last CP in Le Pontet. There was only 14kms to go with a 500m climbs. I could do it.
Seeing Nicky Spinks leaving the last CP motivated me and we left a few minutes later. We caught Nicki in the last climb. She was clearly suffering from the heat. We chatted a bit about the course and how good it would feel to finish. 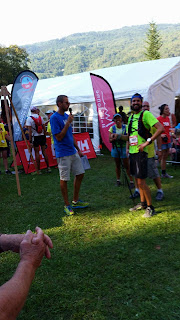 The last downhill was long but liberating. We could see Aiguebelle (the finish) and hear the speakers. There was bit of road to get to the finish line. I saw a guy in the distance waiting and told Laureda that he looked like my dad. It was him indeed! He ran (well more of a jog) to the finish line with us. I felt so elated to cross the line surrounded by all the people I love. This doesn't happen usually and it was something new. I also felt hugely satisfied to have tame this beast in spite of feeling so weak and vulnerable when faced to it.


Afterwards, I got a massage and caught up with a few people I had met during the race. We shared our war stories and I promise I will NOT come back :)
It's been two weeks now. And I still think this race is the hardest I'v done to date. I am not sure I will do it again. But never say never!