A geography degree, a map, a compass and a GPS…no excuse for getting lost, right?!

After having recently completed the CCC and despite swearing numerous times during the race that I’d never run the UTMB, I decided that I might as well try and collect the 9 points, put my name into the ballot and see what happens. Having picked up 3 UTMB points from the CCC, I needed to collect 6 more points from 2 races before the end of the year. After a quick search on the UTMB website, I noticed that there was a 3 point race in the Peak District, called the Peak District Gold Ultra Challenge, which was approximately 100k in length with 3,000m of ascent. A week before the race and entry was still open, so I thought that I might as well have a stab, even though my feet had not fully recovered from the trip to Chamonix.

The Peak District is a lovely part of the country and I’d not been up that way for a few years. In fact, the last time I’d visited the Peaks was with a bunch of lads on what can only be described as a ‘Withnail and I’ weekend away, fortunately without the presence of an Uncle Monty character. One of these chaps just happens to be the race director for a certain ultra marathon which takes place on a small Welsh island. 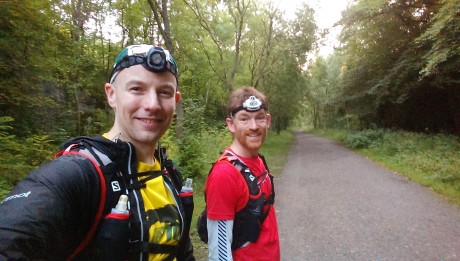 Hitting the Monsal trail with Toby

A couple of friends (Donna and Ludo) from my running club had also signed up for the race in the Peaks. Given that it started at 9pm on the Friday, we all decided to work half a day and head up in the afternoon. Escaping London was relatively easy, but we set off a little late and ended up arriving at the start in Hathersage approximately 20 minutes before the race was scheduled to begin. There was no time for pre-race nerves, as I was desperately trying to get dressed and sort out my equipment whilst the race briefing took place. At registration we were handed a map of the route and in return we handed over a signed form saying that we were carrying all the mandatory race equipment. Believe me, there was quite a large amount of equipment required for the race, including two O.S. maps and a blizzard survival bag. Still, it was possible to pack reasonably light, although not as light as I would have liked. 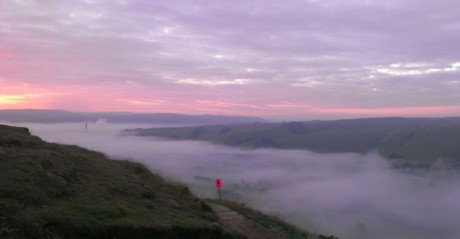 Stunning sunrise over the Peaks – photo taken by Donna McCourt

Prior to the race there had been few clues regarding the route itself. The website gave a very high level overview of what the route would be, and we were provided with approximately 50 grid references to follow; over 100k it left the navigation very open to interpretation. Also, the map we were provided at registration was high level and did not provide enough details to fully navigate by. As such, it’s fair to say that I was slightly nervous as I set off at 9:08pm, approximately 8 minutes behind the rest of the field. I had a rough idea of which direction to head in, but there was no one to follow for the first couple of miles in the dark. I managed to take a couple of wrong turnings, and had to back track a number of times before I started catching up with the back of the pack.

This race was certainly going to be a challenge. Navigating at night with a head torch was proving to be much tougher than I expected, and I felt well out of my comfort zone. I’m far too used to following bits of tape, other runners, or geographic features in daylight, or glow sticks and reflective tape at night. Suddenly the uncertainty of each step left me feeling fearful, particularly when there were large drops at the side of the trails up on the high peaks. I knew that I wasn’t the only person struggling with the navigation as I could hear another runner on a lower path grumbling and fighting his way uphill through the undergrowth, after having missed a turn. 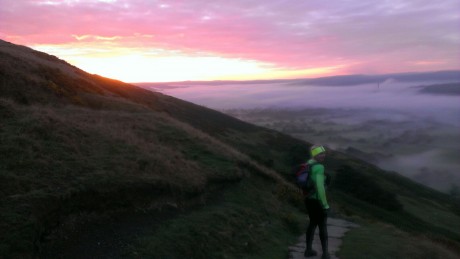 Into the dragon’s breath – photo taken by Donna McCourt

Approximately 10 miles into the race I was given the choice of running along a main road, or following a path through a field. We had been instructed to follow footpaths where possible, so I opted for the latter. It was pitch black and there was a mist slowly descending upon the fields. As I moved my head from side to side, all I could see were yellow eyes were staring back at me. Having watched far too many horror movies, my mind was working overtime, which served only to increase my pace.

I kept losing track of the footpath and then suddenly my foot disappeared with a splodge and I fell forward. I was up to my knees in a bog and fortunately my poles had prevented my arms going all the way into the mud. The sheep surrounding me certainly heard a few choice words and I decided that I really wasn’t enjoying the race at this point, and I started questioning whether I’d actually finish.

Shortly after this incident I found my way back onto the main road, where I bumped into another runner called Toby. It turned out that he was the chap I’d heard fighting his way through the bracken earlier on. We decided that we might be more successful at navigating if we stuck together for a bit, and to be honest, I was glad to have some company out on the dark trails. 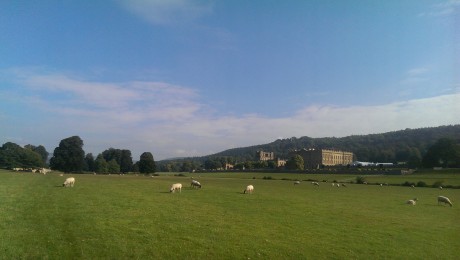 To keep the account of the race as brief as possible, here is my summary of my personal high and low points: 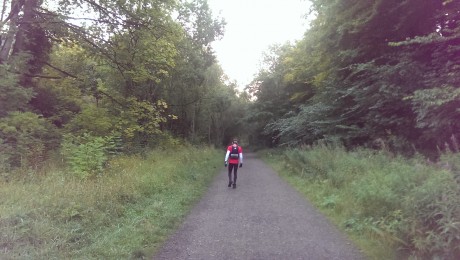 The Monsal trail was easy running for around 10k

All in all, it was a tough race and I felt that the 3 UTMB points had definitely been earned at the finish. The navigation aspect was certainly much tougher than I expected, but the route itself was fantastic, and it definitely made for a great run. I just wish I’d been able to see much of the scenery in daylight hours. 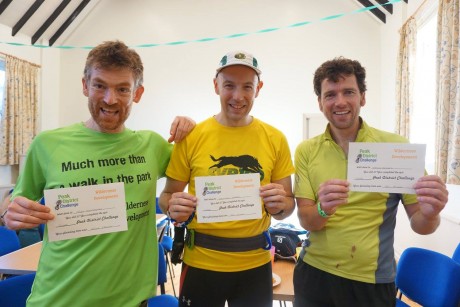 A curry and a certificate for finishing

I learned that I’m not very good at running on my own, as I prefer jokes and banter with another runner to help me through the tough times. Being with another person also really helped with the navigation as we were able to sense check decisions before heading along new paths. I’m not sure I enjoyed the last 10 miles, despite the scenery being stunning, but that was probably due to my lack of fitness following the CCC. However, in retrospect, I’d definitely recommend the event to other long distance runners. The cut-off of 24 hours is definitely quite challenging, as demonstrated through the DNF rate which was 53%. There are a few small things that the race director could improve (see my list of ‘low points’), but overall it was a well organised event, with plenty of aid stations on a very suitable route for running, and reasonably good value for money at ~£65.