‘Tis but a scratch! The Quest…. 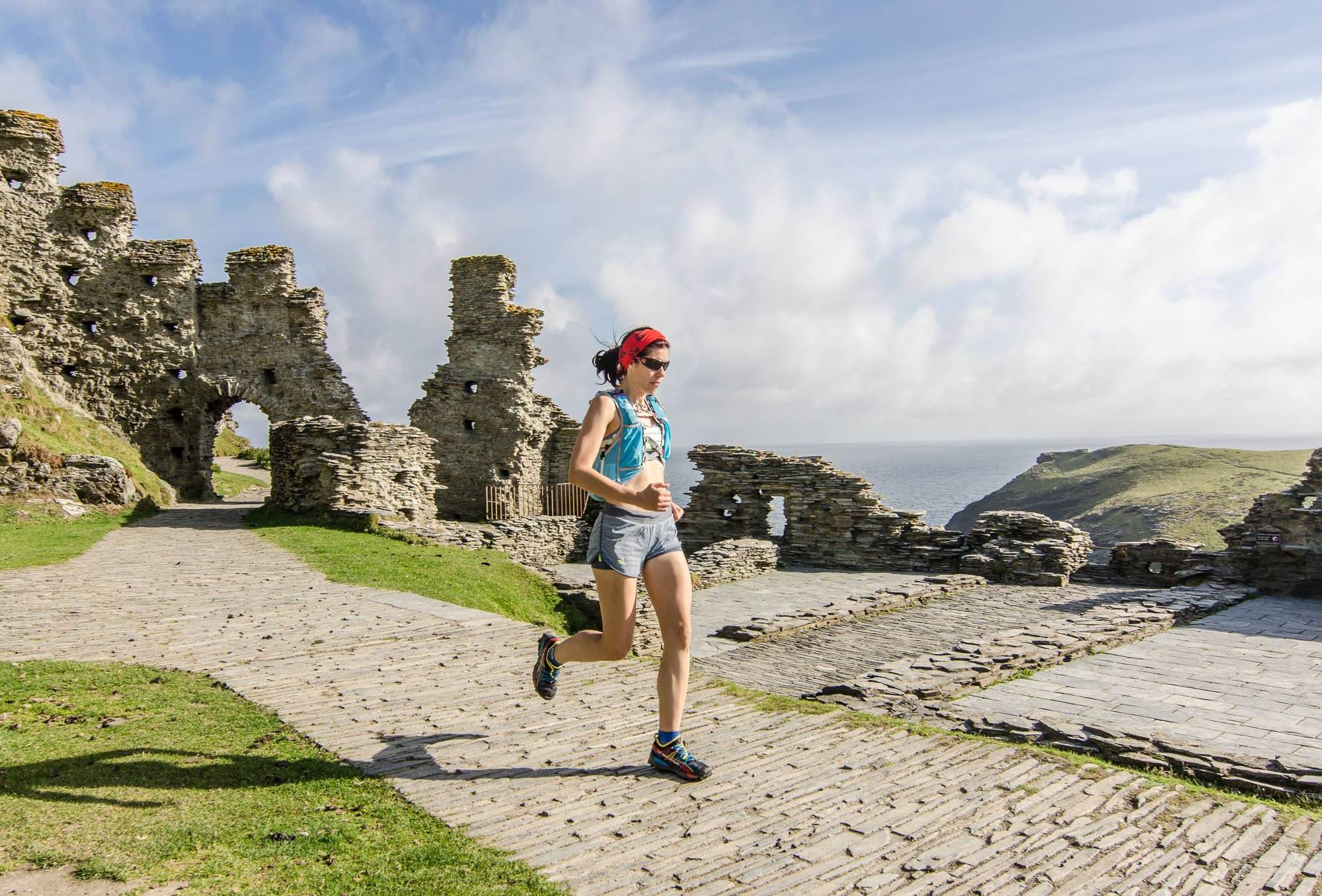 It wasn’t what you normally would call a perfect May day, but then this wasn’t a ‘normal’ May day.

Tintagel is special place by any measure. The castle, built by the 1st Earl of Cornwall, Richard, in 1233 paid homage to Arthurian legends penned by the historian Geoffrey of Monmouth. Now ruined, it still sits proudly from the mainland onto connected island, resplendent in the Atlantic – ok, enough of my medieval history geeking!!

So it was, at this magnificent location the inaugural edition of The Quest ultra marathon started. A stiff breeze and a splatter of rain greeted us runners as we stood shivering – me, in part because I steadfastly refused to don a raincoat in May! – on the footbridge between the two halves of the castle. Facing us, the first of many climbs, a brutal hike up the stone steps that would lead us onto the coast path and towards our first leg check point at Port Gaverne. If there’s a more impressive (and more intimidating!) start to a race I’m keen to find it!

The horn sounded and off we set, grumbling jovially as hands instantly hit knees for a speedy climb. The first couple of miles to Trebarwith Strand are smooth and runnable so I made the best of it. Having recce’d the course over the preceding weeks I knew there were some tough hills on this leg so I made the most of running fast, so fast in fact that I found myself in the unusual position of being the ladies race leader……

My aim for the race was simple, ‘give the best performance I can, and do justice to my training’, no concerning myself with what other people were doing, no thinking and worrying about what was ahead, just running in the moment and doing what felt right. I’d worked hard with my coach on just ‘running by feel’, and this was my first big test of that. The temptation to look at my watch is normally overwhelming, but I set it to timer and turned the mile pace alerts off and ran totally by how I felt at any given moment – save for a couple of panicked checks when I thought I had turned my watch off….. If it ain’t on Strava right?!

……. And so that’s how I found myself out front, I panicked a bit at first, managed to get into a competitive mindset when another lady overtook me (who turned out to be in the relay, doh! That wasn’t so zen….) and eventually settled into a nice pace. So en route to the first leg turnaround at Port Gaverne we encountered 200 steps up from Trebarwith Strand straight up to the top of the first of many big hills, some menacing goats – I promise I didn’t imagine them!- and few dozen stiles. After eight miles I hit the cruelly steep tarmac downhill into Port Gaverne, the first leg turnaround at eight miles, a quick slug of red bull and a water refill, collected a relic (questing for a grail and a sword, natch ) and tramped back up the hill to make the return journey to Tintagel. So, quick recap, stiles, scary goats, down the 200 steps and a smooth couple of miles to Tintagel…. phew!

In the intervening period, I had become so focused with staying in the top three that I pretty much ate nothing for almost three hours and then, as I deserved, gassed out and suddenly found myself getting passed by everyone, until I was in sixth position and rapidly being gained on by some speedy ladies! So after cursing myself for about three miles of leg one, refilling my tank – clif bar, nice but dry, veggie sausage, normally great, today, choked on it, pineapple gel, bleurgh – I had a mile until I arrived back into Tintagel and the food was at least starting to kick in.

I ran down the hill into the checkpoint at the castle and to my surprise saw three of the ladies who had overtaken me still there, clearly my death march hadn’t been as bad as it felt. I refilled my bottles and quickly headed up onto the hill out of Tintagel to begin the second – longer – leg to Crackington Haven.

The first 6 miles were the only ones which I hadn’t run in training so I was excited to discover that they were actually very runnable. I was still in sixth position, but I had started to feel really positive and as I was running very well, and most importantly without any major issues so far, I was really happy. The gorgeous swathe of bluebells in the first couple of miles even made me do a little dance – good job there was no-one around to see! Rocky Valley sounded intimidating but turned out to be so magical I stopped to take stock for a few moments before beginning the descent to the bottom, and then quickly straight back up the other side.

The 6 miles to Boscastle flew by, the amazing marshals all offering encouragement (and treats!) at every point. At Boscastle farm shop I refilled and had some banana in preparation for the upcoming big climbs and the last six miles to the turnaround.

I remembered the hills being super hellish on the training run, but today on fresh (well ish by that point) legs they flew by. The downhill sections were really technical, with up to 34% gradients, loose rocks, slippery and muddy with a smattering (!) of steps, the trickiest I had experienced outside of Montana. My quads felt surprisingly strong and as I started to near Crackington Haven I realised I had yet to see a lady on the return leg, in fact, it wasn’t until I had around 500m to go that the first lady – looking great and cheerful – came back. I’d overtaken one of the other ladies a little way back so I was fairly sure I had moved back up to fifth at that point, although I knew there were some strong ladies not far behind with more experience than me, so no resting up!

A quick refuel, collected my second relic and I was off! I could see that I had  started to gain on the fourth place lady so I pressed on as quickly as I could making sure to stay upright on the down hills! My quads felt amazingly intact, so I made sure I pushed myself on the down hills, knowing that the up hills would be slower.  Around a mile from Boscastle farm shop checkpoint I overtook the lady in fourth place – an amazing runner who had never raced any distance before, bright future ahead! I grabbed a bit more water and banana at the check point and then ran like the wind, six miles left and I was feeling good so I figured I’d fly along and really enjoy the flatter sections. By the time I hit the last mile I was listening to a bit of Aqua – yeah that’s right! – and I was definitely singing out loud….. I hit the last down hill into Tintagel listening to the sound of ‘We Move Easy’ by Welshly Arms and I felt absolutely elated to run into the castle, my parents had come to see me race so it was lovely to see them there. The icing on the cake was that I had been running in 3rd place since before Boscastle (the original leading lady had sadly pulled from the race at Crackington Haven with an injury) a relay runner had said they thought that I was in third further back, but I didn’t really know so I just put it to one side and enjoyed the experience.

And what an experience, amazing race, lovely runners – I loved talking to and well wishing everyone from those in front zipping back past me, to those that I saw on my return leg and most of all I loved the incredible support from the marshals and the ever awesome race directors Fergie, Jane and Andy at Mud Crew. I am so proud to be able to represent such an amazing club and run with such brilliant people, and even better I now have a pretty trophy as a reminder of the day! AND to make it even better, Duncan finished the race as his first ever ultramarathon in an outstanding 11hrs 36mins, I cried at that point!

So, in summary, bloody brilliant race with…. Deep breath; 9hrs 45mins, 3900 steps, nearly 12000ft of ascent and same again in loss, and stiles…. Just, let’s pretend stiles aren’t real, like the bogeyman, but for runners, and a week later I am still trying to pick a gorse splinter out of my thumb! Onwards and upwards, it’s the Lakeland 100 next

and I am off to recce that route as I write…. hope it stays sunny!

See you in Tintagel…. http://mudcrew.co.uk/event/the-quest/