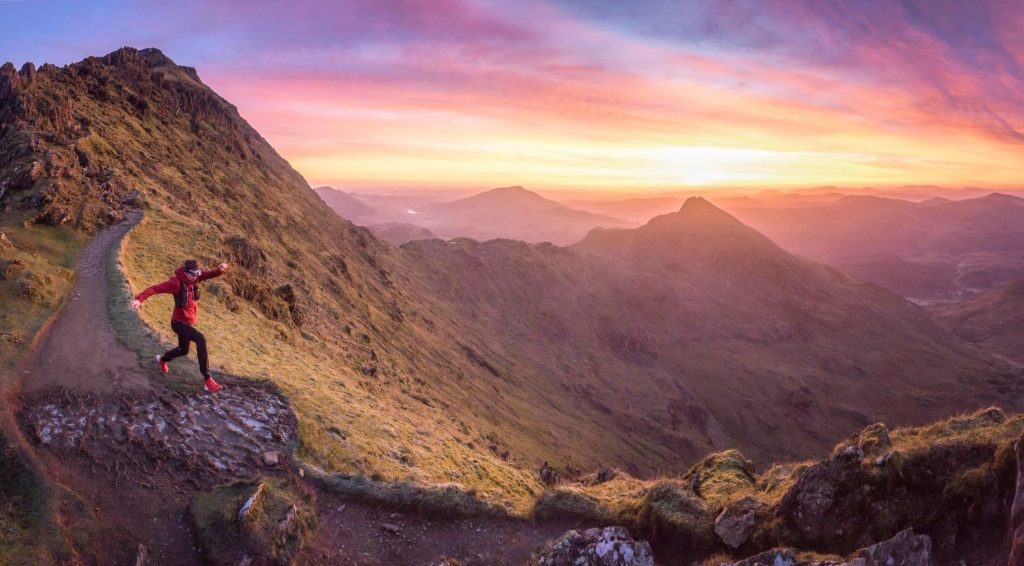 After about three years of only entering and running trail races, vowing that ‘technical’ routes were my nightmare, last weekend I found myself clinging to what I deemed a sheer rock face in Wales roughly halfway into a 50km mountain race. Was I practically frozen, unable in places to lift my left leg and needing someone to talk me up? I was. Was I questioning what the hell I was doing like I did on the Hardmoors 160? I was not. For the first time in a long time, I was completely present in a race, focused on getting up that rock face, or getting down the next rock face, or pushing hands on knees up a steep, long climb. This was the UTS 50: the race that gave me my joy back.

Having entered the UTS100 earlier this year as a point bagging event for UTMB, it hadn’t crossed my mind that I wouldn’t be ready for such a monster over three months after the 160 turned me inside out. In my head, the Welsh mountains were all green and rolling and I had somehow forgotten about all the big pointy rocks. So when we went for a little holiday there in July, I decided pretty swiftly to sod the points and drop to the 50k instead. There was no way that I was physically or mentally ready to be out for another 20+ hours in an area I didn’t know well that would probably break me even more. The 50k would still take a loooong time but I should be home for tea.

With over 3300 metres of elevation over rough, steep and technical terrain, this is not one for people unaccustomed to hard work or long days out. The UTS races – there is a 50, 100 and 165km trio to choose from – are the closest we have in this country to the kind of elevation you get in European races but over much more formidable ground. The UTMB races on the whole are run over very well trodden, smooth trails with very little mud and very little chance of getting lost. For context, I ran the 50km OCC race in 2014 in 7.43: you’ll see how long this one took me later!

While I would usually give a detailed blow by blow account of the race, I have decided that in keeping with what I got from this event, I will not be analysing every step, every mouthful of food and everything that I could have done differently. What I will do is give you some highlights:

Starting in the middle of the pack and feeling completely anonymous. No start line jitters, just gentle excitement at the thought of being out all day in a beautiful place.

Running strongly up the first long climb to Moel Siabod after feeling so weak, tired and rudderless since June.

Trying to jump bogs and failing miserably because I have short legs but finding it quite refreshing.

Meeting so many first time ultra runners on such a ridiculously hard course.

Pretty much walking most of the climbs and descents from then on as they were so steep, loose and rough and not giving a fudge about it.

Despite not racing, being super efficient through the checkpoints.

Running a bit with Dan, one of Jayson’s coachees, and just knowing that he would finish this one after a couple of DNFs.

Seeing Ian Corless on top of a mizzly hill and enjoying some banter – it’s been a long time!

All the mizzle and clag on the tops completely ruining most of the fabulous views but making it feel like proper fell racing.

Seeing Caroline, Dan’s wife, with all the dogs including little Bertie pup in his pouch.

The queue of runners up Pen Yr Ole Wen making me momentarily cragfast. Climber Adam appearing behind me and talking me up for which I am forever grateful. 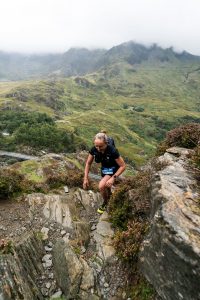 All the mizzle and clag on Carnedd Llewelyn meaning that myself and two others almost went wrong but were called back by saviour Adam, who also was a better navigator than most of us!

The joyous grassy descent that I could actually run after all the walking.

The wild pony that looked like a Rasta lion with his magnificent and twisted mane.

The joyous descent taking so long that when I realised about two thirds of the way down my quads were a bit smashed it just seemed kind of funny.

The dream of sandwiches at the next checkpoint coming true in the best way: white bread and cheese slice tasted so good I took three.

Being able to run in that very tired but fulfilling way along the the side of a reservoir and being overtaken by the astounding Josh Wade, second place in the 100k.

Being overtaken by all the people I had run past by the reservoir on a rough section of felled trees and bog and really not caring at all.

The final cheeky little climb revealing a gorgeous green valley below, just as the sun was getting lower in the sky.

Hearing the finish line cheers tantalisingly close and being steered further away before hitting the tarmac of Capel Curig.

Running down the road, an actual grin on my face and a lump in my throat, to see Jayson, Caroline and the finish gantry. 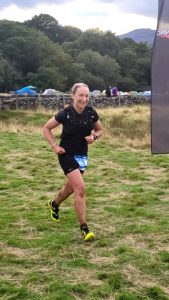 An obnoxiously large cheese and pickle sandwich and a beer while sharing stories with other finishers.

Seeing Dan finish like an absolute train, covered in bog, with a broken pole but so, so happy.

Breakfast the next morning in Cafe Siabod, obvs.

This was a race that I was never going to place in. It took me 9.52, longer than a race of the same length and with more ascent in the Alps, and longer than any of the 50 mile finishes I have. It is deserving of its tagline: ‘Beautiful beyond belief, savage beyond reason’. It marks the first time in a long time that I have finished a race feeling elated and that is what I wanted to get across in this blog. I had fallen into the habit of choosing races tactically based on what I thought I could do well on, but told myself I was choosing races that I would enjoy. I did enjoy some of them, and I would be lying if I said winning isn’t a fantastic feeling, but…

Here’s where I might sound like a privileged ingrate. Winning never entered my head when I started running. I trained well and when I ran happy, it often meant I did well in races. It was pretty much an accident for a few years that I came away with trophies. Then the cycle begins: you do well, you think you should always do well. You start to look for races that suit you and that you think you might perform in. You start to get people telling you what a great runner you are or that they admire you. You start to chase it. For some people, that is great motivation and they love competing. I get it, but I have come to realise it is not what I want. Not now at least. I want to start a race again where there are no expectations; where no-one asks me why I am so far back and I have to explain myself; where I can run my best if I choose to or have a jolly day out if I choose to and where I cross the line with a smile that hurts my jaw again. If that means I come 1st, 51st or 201st, I don’t think I am going to care so much from now. The UTS 50 pushed me squarely out of my comfy smooth trail running safety net, gave me some nice little bruises and some great memories to call on when my ego starts jabbering in my ear. It gave me my running self back.