New for the Spring 2014 range of Salomon trail running kit was the S-Lab Advanced Skin M Belt Set. Waist belts have the tricky job of carrying a reasonable amount of kit, for example Fell Running Association (FRA) kit, without moving around much and remaining comfortable.

Running over technical terrain with a full belt pack is a good way to put it to the test. It's not uncommon for them to bounce around, rubbing on your waist or if you're really unlucky spilling kit all over the trail.

The S-Lab Advanced Skin M Belt is a development of the previous S-Lab waist belt. The increasing demand from runners to have a compact and comfortable way of carrying kit when on the trail has lead to belts like this one becoming well established. 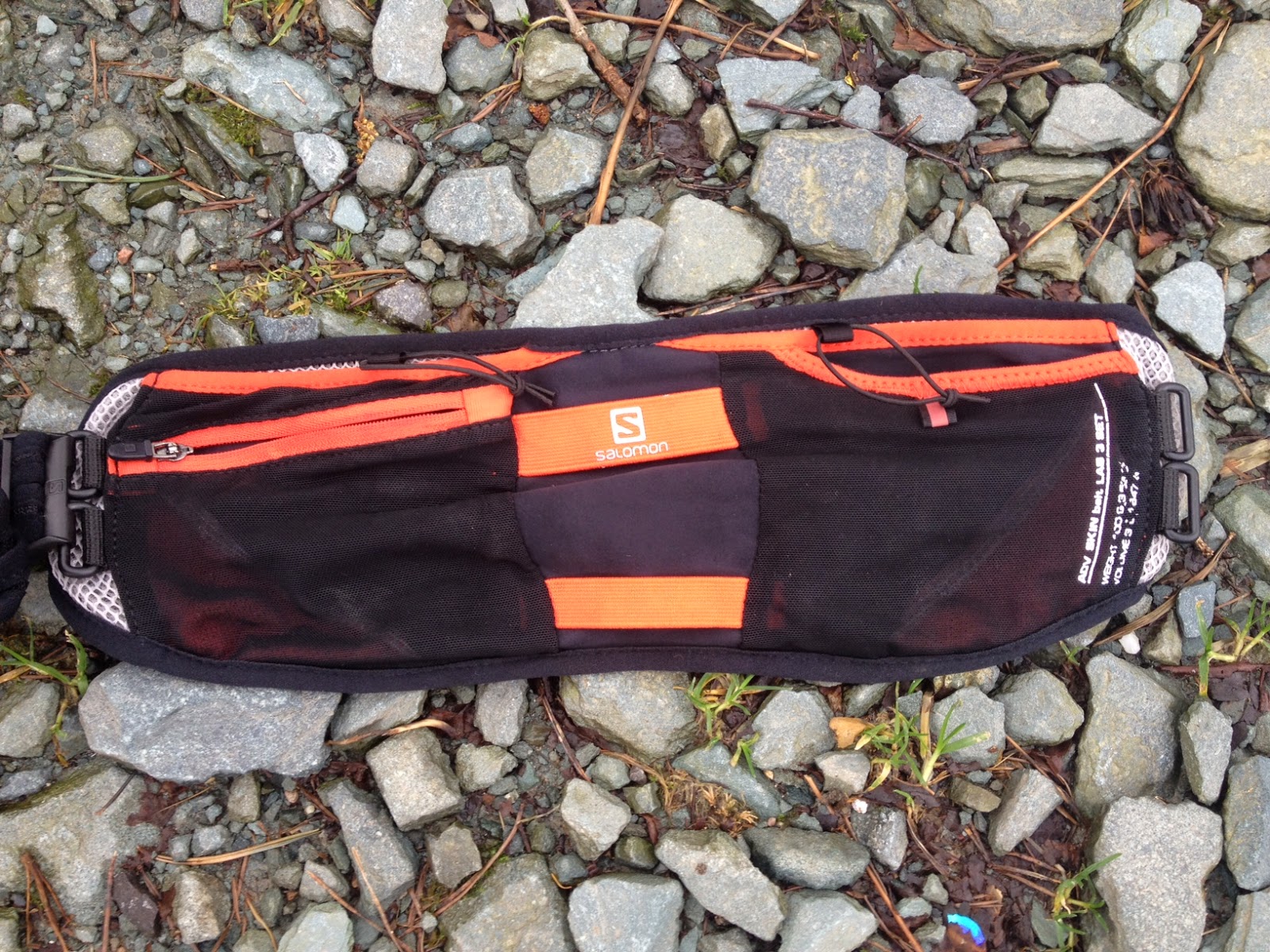 Belt packs have been a big part of the Fell Running scene for a long time so the concept is nothing new. The Salomon take on it has several features which you notice quickly. First off the width of the belt all around the waist is much broader than normal packs which use thin webbing and a buckle.

I found this extra width gave two advantages - comfort being the most obvious one as it spreads the pressure and increasing stability. This is a big factor for me as I find a bouncing pack incredibly irritating and one reason why I previously had avoided waist belts.

There is a deceptively large amount of space in the pack, being constructed from elasticised materials means that there's plenty of give if you want to ram it to the brim but equally will hold small amounts of kit stable. Access on the whole was really easy, to get stuff out with it still on and while running was pretty easy. The only time I found it difficult was when wearing thick winter gloves the small zippers were hard to hold while on the move.

You will have seen Salomon athletes using this waist belt as, like all S-Lab products, it's athlete designed. This encourages the fast and innovative progress in trail running kit design from the pointy end.

Included with the waist belt is a 500ml Soft flask, as testament to their popularity these awesome bottles have now been copied by every brand. With your 500ml of water, snacks and kit packed into this neat belt you can stretch your legs for those long runs without worry. They also make a great option for racing, there is absolutely no doubt that being lighter is a great way to be faster and especially for marathon distance these can be an ace solution.

At 130g this pack may be heavier than others on the market, but it more than makes up for it in space and comfort. If you're looking for a new pack it's well worth trying out the S-Lab Advanced Skin M Belt Set, especially if you love running in remote areas.