I've must have rewritten this blog entry  20 times. Even thou we've completed this race at the beginning of september ( the 06th), my dark mood kept staining the beautiful route and organised race of the 10 peaks: Brecon Bacons. So my apologies for taking so long, I hope it won't be too disappointing to read ;)

The 10 peaks Brecon Beacons was our first race in the UK after spending 3 months running up and down high mountains...

Mick thought this race would be a good transition as it was in the Black Mountains and it seemed to have enough elevation for me not to moan about being too flat. At the time of registering, I agreed with everything he said, I was hyper from the finishing of the Andorra Ultra Trail and so I thought I could do ANYTHING…even running! 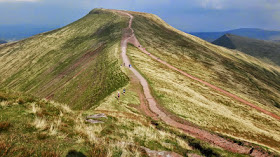 What I had forgotten thou is
a) I can't sleep the night before the race
b) This is NOT Andorra type of terrain
c) Open lands, miles of it
So the night before the race, it was with no surprise that after turning and tossing for 8 hours, I was ready to fall asleep when the alarm rang instead of getting ready, and my mood was not as great as when I had registered for the race.
But, the start was as quiet as the day slowly awakening and passing the Talybont Reservoir Bridge, to the road and up our first climb, I was glad to feel the ground we had reece and picture the lavender field passing by to reach our first beacon ( but not the official one) 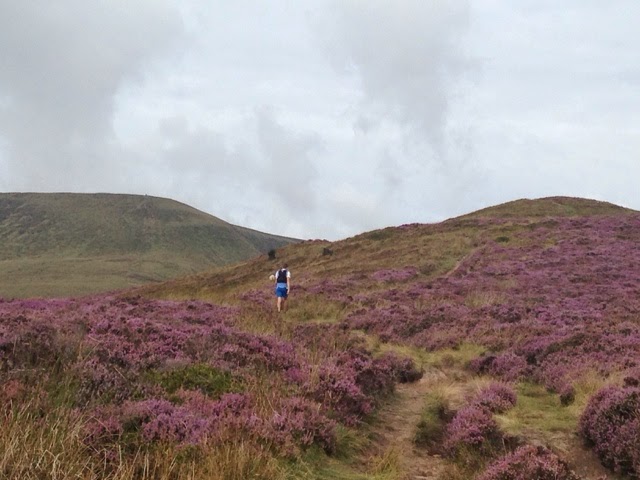 Passing the first beacon, we attempt to follow the trail made out of sticky mud and big gaps, come to a junction and get confused with Michael GPS watch directions (the finish track is coming down, while the start track is on the left) but as the day awaken, the familiar reece track come to light so we juggle between rocks towards Trig 642 without getting lost again.  By then, I had twisted my ankle (surprise!) but still attempting to follow Mick's relaxed pace to not get lost. Reaching another reservoir, looming in front of us in a gloomy daylight  is a short but sharp vertical climb allowing us to view the next part of the race, a long run on a dragon's spine (the ridge) before going down on a paved looking trail to our first man checkpoint. 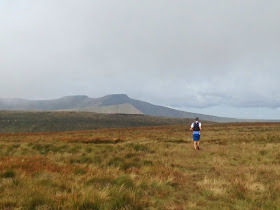 At the first feed station, we are welcomed by the race director as well as a nice table full of bananas, cliff bar products and encouraging smiley volunteers, not much time is spend there as we know our first official PEAK Fan Fawr (734m) is straight up. 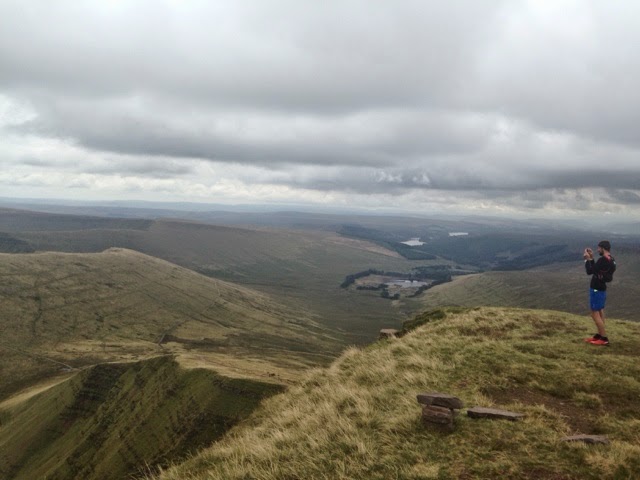 This one is very mean! The top of it looks very close  but actually it is just an illusion as no matter what we do ( run or walk) it just doesn't seems like we are getting there fast enough! After reaching the top and bip the beacon we run down to cross the river and go up to Peak 2: Fan Llia (632m) 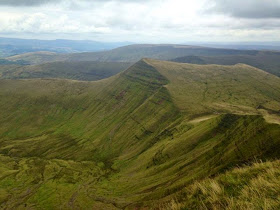 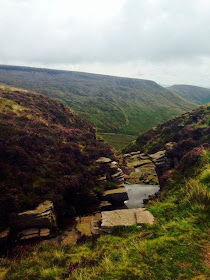 It is nice and smooth, no high grass, no funny holes, just nice. The climb to Peak 2 is quite entertaining as there is no official path, high grass, no straightforward top so you need to pick a track and stick to it, hopefully it will lead you to the top. Having runners from both side of our track, I wonder who is going to get to the top first as we all seemed to think that our respective line is shorter/faster or more straightforward. But at the top, I smiled as we all arrived at the same time, some more frustrated than others perception is very deceptive…especially with mud holes and high grass. Reaching the beacon of Peak 2, it’s now downhill to reach CP2. That’s when Mick twists quite badly his ankle, he think it sucks as apparently we are doing great with time, I think it's great giving me a reason to slow down.


We reach Feed Station 2 which as the same food option as FS1 with the addition of sticky cake, really sticky cake! No time to unstuck the cake thou, we already have to go! I feel rushed, so much so that I start to get moody very bad at Mick and the volunteers. Lack of sleep? After apologising, we make our way to CP3, I guess the fact that we have to run for a flatish 10 km before being able to justify walking is not helping my mood to get better.
Luckily the drastic changes of scenery helps and after some fuffing and puffing away (from me) feedstation 3 with its Pirate theme appears and what I thought was a 2 hours gruelling run between the two FS takes actually less than an hour (I should get a watch)! I stuffed my face with cake, oranges and more cake before Mick said we had to go to reach peak 3 and 4… We follow a cool dude before climbing up quite nicely until a ridge. A ridge means running, ridge with shallow climb still means running. Yup, that's definitively a lot of running involve compare to what I am used to and at this point, I'm struggling in my little bubble, and make Michael and his companion in crime cringes from my moody comments and "run away" from me. I am sooooo not happy but we reach peak 3 and peak 4 is just an down-up-down-up business, right? So with still a crappy mood, I start the down...until I see a lady ascending... it's lady 1!!! I'm so excited she looks so fresh, oh and here is lady 2, looking good too! OK so it must not be that bad to go up and down and up again then! Seeing them cheer me up and so here I am going up to Peak 4, down to go back up to peak 3 and down to CP4. It's a long descent and quite shallow but challenging with hidden potholes, little wind and loads of sun, mood is back in my socks and I start imagine how cool it would be to just stop and enjoy the sun!

Arriving at the feedstation 4, my daydream is still playing in my head. Mick is waiting for me thou, he is looking fresh and enjoying himself so much, why can't I do the same?
I decide not to stop just yet as I'm told there is this big climb right behind the FS. After 25m of straight grass vertical, we are all on our knees and hands...arrh I'm about to moan when Mick (having enough of my dark mood) tells me straight "give up now, or shut up and carry on" so...what do I do? I shut up and carry on, till the  top, then down, twist my ankle, cry a bit still reach Peak 5 Fan Gyhirych (725m) and down, up again to Peak 6 Fan Nedd (663), and down, curse at the Roman road track, and finally reach another big long climb to peak 7. After having fun for 10 mins,  I feel tummy sick, throw up a bit but Mick hasn't slow down so I need to carry on as there is no place to quit and get a ride.  I feel quite bad that Mick has to endure all of this....
We still haven't found the beacon of Peak 7, we think we are lost. My bad! I thought it would be a good idea to just cut a straight line to the top ignoring the gps track...(lesson from Peak 2 that perception is a killer hadn't sank in yet) Mick curses and for some reason it makes me feel better haha! We finally reach the peak and the pretty single track downhill to Feed Station 5. I know where we are now, we've reece this part, and I can feel the end.

It also means that the finish is not as far as I thought (really need a watch) and that we could be there before night time!!! I'm so excited about this that I'm all pump up to fly, looking at Mick I tell him let’s go! poor sod, I wasn't even giving him the time to fill his water bottle...Oops, waiting "patiently" we thank everyone and start our climb up towards Peak 8, it’s long thou, quite shallow, I feel so slow as walking is not eating enough metres but running is taking a lot of energy.
I wonder where Lady 2 is, as I can't see her in the distance. Mick is so far ahead and waits at the top for me,…I'm such a turtle!
Finally reaching the top and Mick, he wonders where Lady 2 is as he hasn't seen her and her pacer. She is such a speedy! Hoping to catch her, I forget about the past dark 12 hours and go faster than I previously did. So we go down and up to Peak 9 Crybin and 10 the famous Fan Y Big (719m ) which are the best ones out of the whole race because it's quite vertical with beautiful views from all sides. We reach another dragon spine ( still not in love with those) but as it is close to the finish I just let it go…to the finish. We are now back to where it all started, nothing not even the last bad descent doesn't slow me down ( ok well until we get to the road...) Arriving at the finish, we are 8th and 9th overall, and 2nd lady for me. What happen to Lady 2?!
Going to the YMCA café, we meet others runners from the short race and the cool dude who ran with us until he couldn't stand me anymore ;) he finished well too :)
I'm eager to take the car back to London and sleep. But even the finish is not kicking me out off that funny mood I've been all day, thinking that talking to people would help while eating, we talked to a couple who are saying they tried to caught us up. I wonder why, I thought they were the winning pair, so why would they want to catch us?! Maybe they think we are the winning pair, I tell them we are not, they are looking at me very confused...I'm very confused but then I haven't been thinking straight from the start so, after saying our goodbye I happily take the wheel back to London hope to get some good sleep.

So there it is even thou the mood was not there, I'm glad we made this trip. The race was so well organised and the marshals and runners so nice, that it would have been ashamed not to start because of some dark mood. I just hope for my own sake, I will kick it out soon as we need to get ready for the 3 x3000 80km Ultra in the Lakes District and if I make Mick suffer he will never want to pace me again!

Oh and the couple at the finish! Well they were not a couple, it turned out to be Lady  number 2 ( well 3) ! She had taken another way to reach Peak 8 which was even longer than the one we took and I didn't recognise her!...what a food I've made of myself!