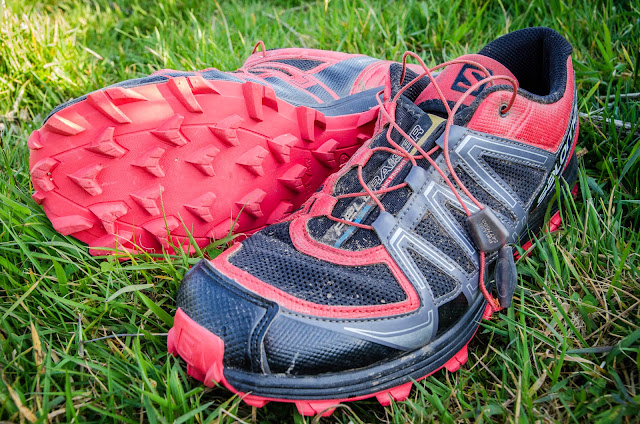 In an arse about backwards sort of way I thought I'd review my Salomon Fellraisers as I hang them up for now and switch to another make and model.  I've really enjoyed running in these shoes, they have served me well on so many levels and I will be continuing to run in them often I'm sure.

Ever since I started running off road and looked at getting a pair of trail shoes the Salomon range appealed. On several occasions I had slipped my feet enthuastically into the brightly coloured saw toothed monsters that are the Salomon speedcross, hoping each time that last time I was wrong and that they really did fit, but alas, it wasn't to be. Too narrow at the front and with far too much heel at the back I just couldn't get on with them.

Then along came the Fellraiser, not the best looking shoe if I'm honest about it, something about their shape initally made me think "Clarks" but put them on and oh wow what a difference. Much more room up front but snug fitting everywhere else - glove like in fact - and with a significantly lower profile (the Fellraisers heel-toe drop is 6mm), these immediately felt like a shoe I could get on with.

That sensible exterior is made up of a sort of plasticy faux leather which looked pretty hard wearing with mesh in between for good drainage.  Underneath the sole is almost identical to the Speedcross; that aggressive chevron pattern covering the whole shoe.

The speed laces work well - although I know not everyone is a fan - holding my foot securely and with no slipage around the heel. Despite being pretty low profile they actually feel pretty well cushioned, helped to this in part by the Orthofit insole.

Out on the trail the Fellraiser performs well in almost all coditions, wet grass, mud and loose ground are no match for the Salomon sole...the only weak point being in crossing wet rocks where the grip is not that reassuring. This in part can be put down to the agressively lugged sole but I think the rubber compound also contributes, being quite hard and so not too grippy. On the coast path though for the most part I feel confident in the placements I am making. The close fit also makes a meal of even the most technical ground.

What has really impressed me is their durability. That hard rubber compound has lasted well, the lugs still effective after a year of solid use and the upper looks good as new. So new in fact that, having bought a second pair I was having difficulty telling the old and the new ones apart! I retired my first pair after over 600 miles and really they were still going strong, but feeling a little like the cushioning was starting to go under my forefoot.  I've run on all surfaces and completed various ditances up to 100k with rarely even a blister to show for it. I'm a fan, you might have noticed.

Ultimately for summer use I have decided to use a slightly less agressively lugged, more cushioned shoe (more on this soon), but the Fellraisers will still be my go to shoe for winter and wet weather trail running. Salomon have not done anything noticable to "improve" them this year - although the new colours are, in my opinion, pretty dire - so hopefully they still size up pretty much the same and will continue to do so in future.