“Far from being an elite athlete with superhuman running abilities like the ones he read about in books, Ira Rainey was an overweight and unfit slacker who felt a bit sorry for himself because he had sore feet. Sure he ran a bit, but he also sat around a lot and ate and drank too much. Why? Because he could, and because he was an optimist who thought everything would always be all right. That was until a friend was diagnosed with terminal cancer and given months to live. It was to be an event that would push Ira to tackle his apathy towards life and take on the challenge of becoming an ultramarathon runner, pushing himself to go further than he had ever gone before. An honest and light-hearted chronicle, Fat Man to Green Man is the tale of one forty-something man’s journey from fat to fit, and everything that came between the two. It is a story of fields and friendships; mud and maps; but more importantly learning how to push yourself to achieve what you would never believe you could – and how to deal with the consequences.”

Did you ever dream as a child that you had super powers?  Powers that were undiscovered, yet just waiting under the surface that would someday be made manifest, thereby changing your very existence? 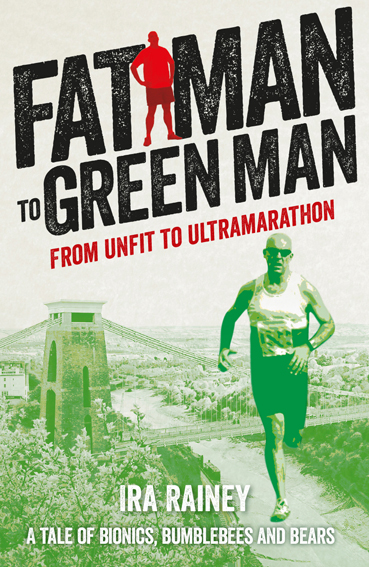 “Fat Man to Green Man, From Unfit to UltraMarathon” (Tangent Books, 2014) is the story of Ira Rainey who, as a child, dreamed that he had super powers.  Specifically, (after a fateful evening of viewing The Six Million Dollar Man on TV) he came to the conclusion that he was bionic.  No one else was aware of this amazing capability Ira had, but he was convinced that inside his young body he was a force to be reckoned with.  Sadly, time passes and pending adulthood looms, and much to his dismay, he realizes that he is quite average, with no super powers to speak of. This story chronicles what happens when Ira decides that enough is enough after learning of the terminal diagnosis of a dear friend and mentor, and finding himself in a rut with the numbers on the scale creeping steadily higher.  He strives to uncover his true super powers by taking the leap of faith and registering for the local ultra-marathon – The Green Man.  Being one of the most optimistic dreamers you’ll ever meet, Ira approaches this task as a “sign up first, sort out the details later” kind of decision. You have to admire his optimism, or perhaps what you could also call a lack of fear of the unknown.  Do those of us approaching our first ultra truly understand the task ahead of us?

Ira has a very fun and light way of narrating his journey; his past, his present and his dreams for the future.  He is self-effacing, can laugh easily at himself, and generally sees the good in tough situations. He offers a fantastic narrative of a man branching out into the unknown of his first ultra.  The author experiences highs and lows in his training leading up to his attempted conquest of The Green Man, and invites the reader along to experience it all.

Judging the book by its title and description, one might be led to believe that Ira is a newer runner, someone who dabbles in running a bit, and after finding themselves grossly overweight – obese, even – decides to start running seriously and eventually tackles an ultra-marathon in a short period of time.  A rags to riches story of running, if you will.  However, this is not a story of a severely overweight man who picks up running for the first time and takes the leap of faith to run an ultra.  Despite the fact that Ira likes to describe himself as a slow runner (often referring to himself as fat and slow) he turns out respectable race times, and was a strong middle of the pack runner prior to gaining weight (and at times, despite his weight gain).  Ira does face his own battles, but this is not the story of a brand new runner reinventing himself and tackling an unsurmountable feat. This is the story of a runner who has found himself motivated to run again after putting on some weight, and after being scared by the recent terminal illness affecting a dear friend.  A man who decides there has to be “more” to life than what he is experiencing; that there must be a way to push himself and face his inner (and outer) demons.  An eternal optimist who is tired of being apathetic and feels that he needs a goal that scares him a bit, Ira decides that training for and competing his first ultra is just what he needs to turns things around.

A few cautions about the book; Ira’s writing style and narration is down to earth and FUNNY, however, as he is British he uses a lot of British sayings and words not commonly found in the American vernacular.  These can be fun and charming at times, but in some situations it may leave the reader scratching their head and pulling up google in order to get the intended point.  Having lived in England for a few years, I was familiar with a lot of the sayings, yet many still left me a bit confused.  The other issue that could be confusing for some is that the author hops back and forth between past and present quite a bit, without clearly delineating the separation between the two. This left me going back and re-reading sections to make sure I knew if he was talking about “now” or “then.”  There were also a few editing errors, which may now be cleared up as I received an advance copy of the book.  Not deal breakers, but misspelled words and missing punctuation can be distracting at times.

Despite these small issues, I found this story highly engaging and entertaining.  Anyone who has ever wanted to feel bionic or rise above the apathy of life they are surrounded by, or has faced the task of their first ultra, can admire and relate to Ira’s struggles. Struggles such as losing weight, overcoming injuries, bad weather (LOTS of wet, cold weather), trying to adopt a healthier diet (Ira isn’t the healthiest of eaters and has a penchant for beer drinking) balancing work, family, and the emerging identity of being an ultra runner as well as the bonds that form between running partners, will leave readers nodding their heads and finding a little (or a lot) of themselves in Ira’s journey. At times laugh out loud funny, at others quite poignant (the parts where Ira faces the impending loss of a dear friend are especially touching) this book is a fun take on one man’s journey to becoming an ultra runner, and finding himself in the process.

[Review by Sarah Scozzaro. She's an Ohio-based Fitness Professional with a Masters in Exercise Science, with a concentration in Performance Enhancement and Injury Prevention. You can find more from Sarah here.]

If you’re interested in purchasing this book, please consider using the link here to the URP affiliate page. It’ll drop a few nickels in our bucket. Thanks!

Disclaimer: This advance copy was provided to URP free of charge and sent to Sarah Scozzaro for a full review. Neither party were compensated for the review. All words are hers.