One of the many events I've signed up for in the build up to the Marathon Des Sables, (all of which can be found here) is the OMM or Original Mountain Marathon. The OMM is a two day event with a variety of different courses ranging from an 80km course over two days (the elite level) down to a 40km course over two days (my level for the moment.) All these courses involve as a general rule a lot of bad weather, mud and of course varying degrees of mountains to be overcome. The OMM is pretty much unique in that GPS is banned, you can only use map and compass to get between checkpoints. There is an overnight camp as a part of the competition, (you have to carry all your own food, tent, equipment etc with you) and it is for this camp that I've just bought myself a Nordisk Telemark 2 LW tent. Here, having received the tent in the post yesterday, are my first impressions.

REVIEW OF THE NORDISK TELEMARK 2 LW

There are two varieties of the tent available; the Nordisk Telemark 2 LW and the Nordisk Telemark 2 ULW.  The ULW (Ultra light weight) comes with carbon fibre poles and weighs in according to the Nordisk Website at 880g. The LW (light weight) which I bought, uses aluminium poles and weighs in on the website at 950g. On my own weighing scales it came at a total of 1053g, though this includes the wind anchor kit (extra guy ropes and two extra pegs) which came free with the tent when I bought it from Elite Mountain Supplies. At £344.95 they were the cheapest by some way and also offer discounts to BMC and various other organisation's members. Buying the ULW version for the 70g difference will cost you around an additional £90 or so.

The tent packed up comes in small. The photo below was taken after the tent had been put up and taken down again.

The ruler gives a slight sense of scale and it is worth noting that the pack could easily be squeezed down further in width if required. When I took the tent down I did not pack it tightly at all.

Putting the tent up is easy. The instructions included are not that great to follow but a quick look on the Nordisk website leads to this video. Basically spread the flysheet, put the poles through it, and then attach the pegs of which there are only four, before clipping in the inner tent. The tent can also be put up with inner sheet already attached. Very quickly you end up with a tent looking something like this.
The tent only needs four pegs as it has clever corner struts which allow for more stability by encompassing small aluminium poles of their own. The guy ropes on each of these struts can be tightened and slackened off with just one hand. 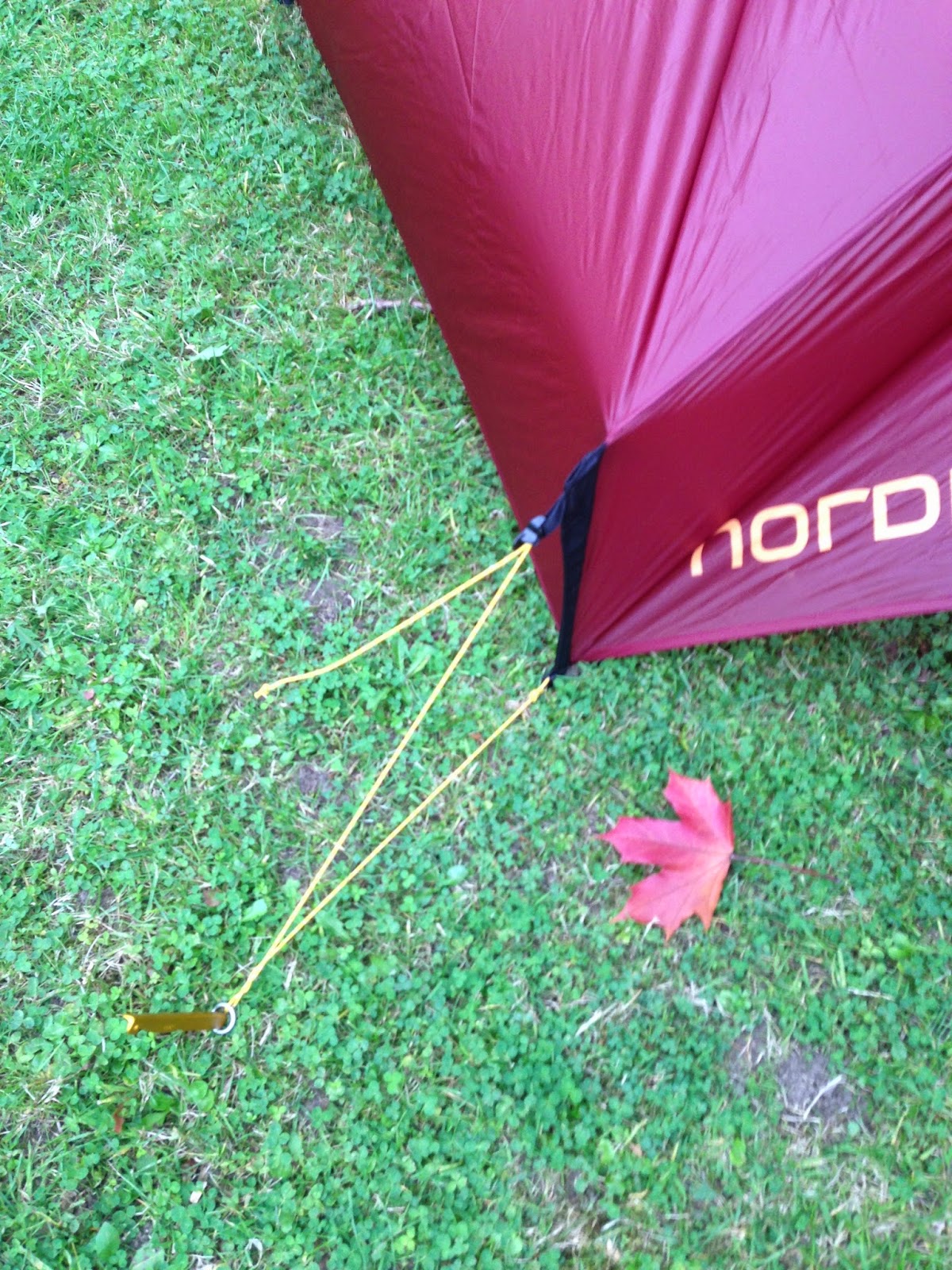 These 'corner poles' can be taken out and linked together to form a support for an expanded vestibule, so you can do a bit of cooking or similar with a little bit of shelter. I had a go at putting up the expanded vestibule in this manner and it worked, but the tent felt a lot less stable without the side struts. I then tried the expanded vestibule using one of my walking poles as a support and leaving the corners as they were. As can be seen below this worked out rather well. The additional guy rope which can be seen here neatly clips on and off the corner of the door when the vestibule is raised. 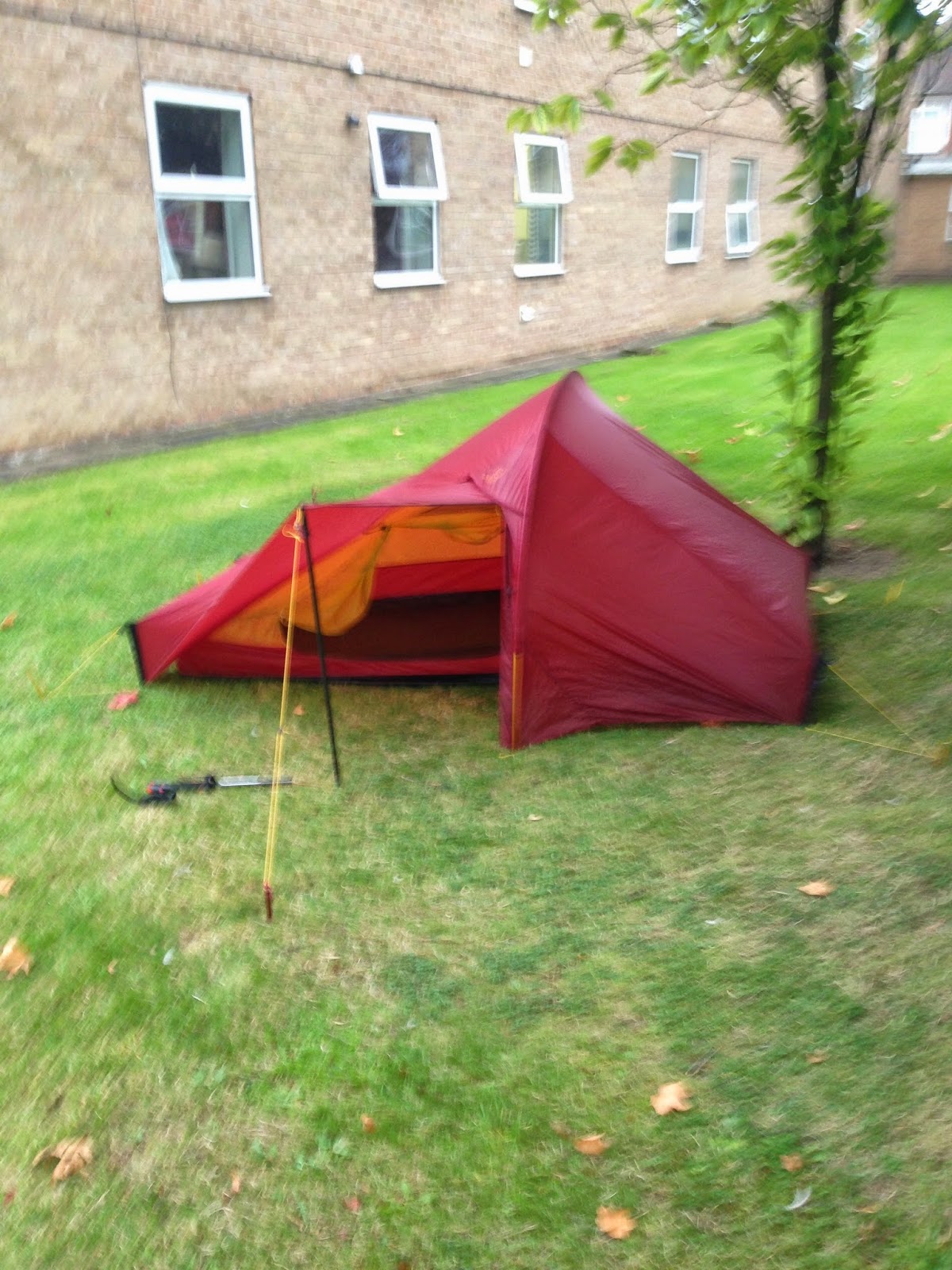 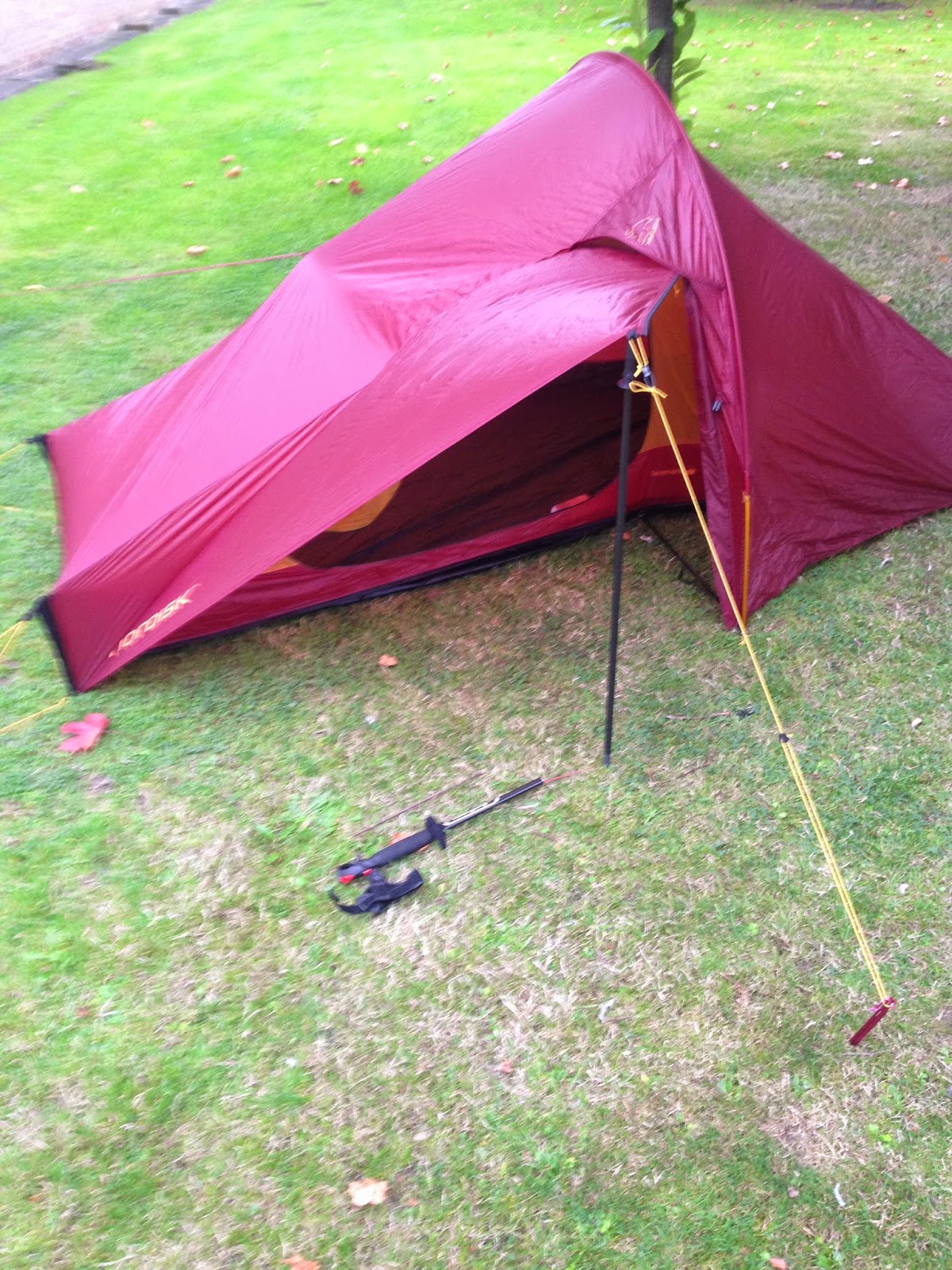 With the vestibule closed down there is a covered vent at the top of the door to allow for airflow through the tent and more unusually at the base of the outer zip a magnet to make sure the zip over is in the right place, thus hopefully adding an additional layer of weather protection.

Inside the tent the actual vestibule size available to you can be adjusted by moving the inner sheet back and forth along a slide. A nice touch which means the tent can be easily adjusted for how much kit you have and how much of it you want to keep out of the inside sleeping area.

The actual inside of the tent itself though not spacious is more than adequate for two people going lightweight back packing. I come in at 184cm (6'1) and had plenty of leg room. The single hoop design of the tent means that it is much higher at one end than the other, and that is probably the end you want to sleep at if you tend to sit up suddenly in the middle of the night.

All in all the tent seems to be a solid purchase. The material is light but feels strong and there seems to have been a lot of attention given to detail. For example the bag for the inner sheet turns into a storage pocket inside the tent once its set up. Nordisk claim that with just the four pegs the tent will take up to a Force 8 gale. Hopefully with the additional guy ropes thrown in it will take even more than that. Obviously this is just a first impressions review, but so far it seems to be a great purchase. I will add more to this as I test it further and eventually use it on the OMM!