Written by the URC team

Running is, and should remain a simple sport with little obligatory gear to just get out there. If you want to pop out for a short run, then shoes and comfortable clothes are the minimum. As soon as the running becomes ultrarunning though, the list grows a little. You will need to think of food and drink, and ways to carry them, plus some clothing for if the weather turns. If you are going to be running at night or close to night, then you will be needing a torch. Depending on your budget, you’ll be after something as bright as possible to light the trail ahead, and help prevent falls. The list also needs a second torch. Isn’t this a little overkill I hear you cry. Well, definitely not. The first obvious reason to carry one is in case your main light fails. No need to explain that any further. The second reason is equally important, though will happen more frequently. Changing batteries. Have you ever tried changing batteries in complete darkness when you are completely exhausted and could really do with crawling into bed? I have, and believe me it’s a potential nightmare. From finding the fresh batteries (and not dropping them!) to fitting them and not getting the dead mixed up with the fresh. You could loose lots of hard earned time if in a race situation, and could really cool down if the weather is bad which could get dangerous.

So, what is the solution here. We need something ridiculously light, super small but with enough light to actually be of some use. Ideally the backup light will be useable even after being stuffed in the bottom of you pack for ever and not need constant battery changes and also be simple to operate in the dark. 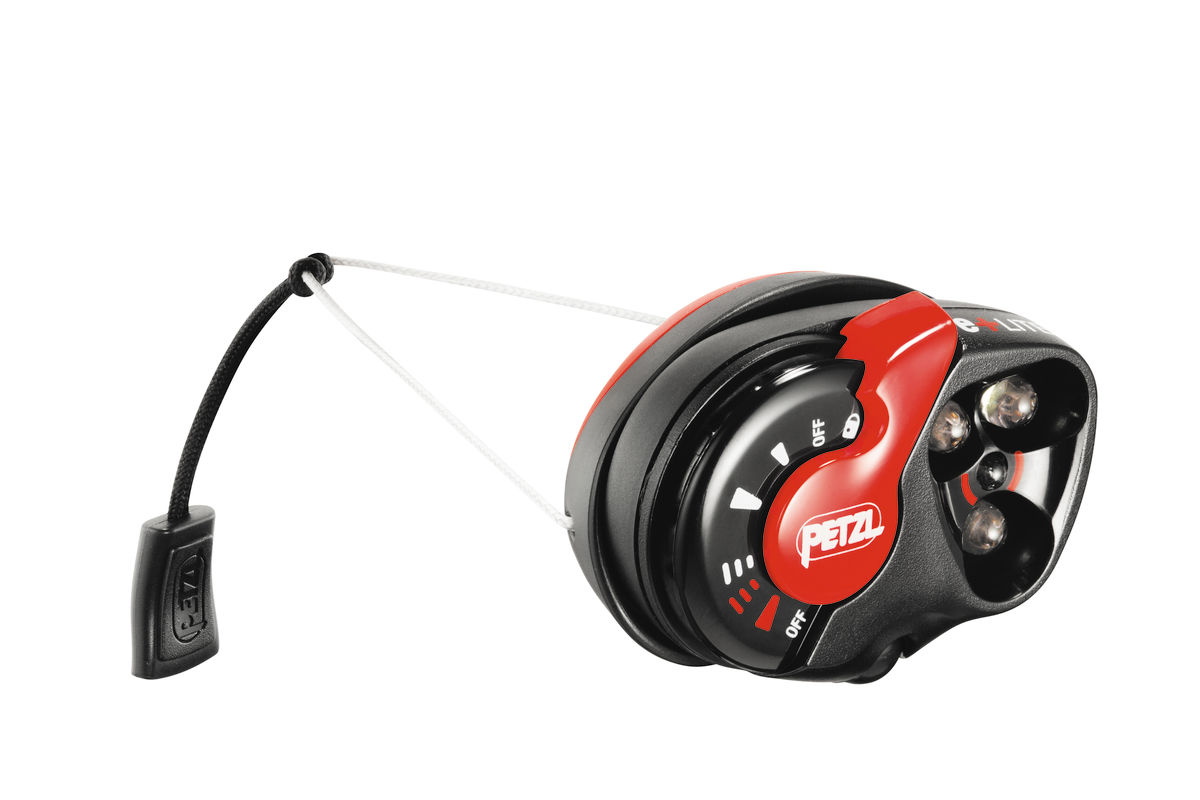 This insanely small and light torch weighs just 27g and is so, so small. I used to have one of these years ago that had a thin piece of elastic to hold it on your head, but now it has a ZIP retractable cord which certainly makes for a big improvement as it keeps it together as a nice neat package when buried deep in some pocket. Many will be familiar with the ZIP system as Petzl employ it on other torches in their range. I find it holds the e+LITE firmly on your head, but if you need to wear it for prolonged periods then it can dig in a bit. This is easily resolved with a buff or hat.

It’s waterproof rating is IP 67, meaning it can be 1 metre underwater for 30 minutes which is plenty adequate for the very worst weather. Normal batteries would double the size, so Petzl opted for 2 x CR2032 batteries (similar in shape and size to a 10p piece).

One of the great features with this piece of emergency equipment, is that you can store it with new batteries for up to 10 years and it will still be useable!

Ok, so it certainly ticks a lot of the boxes that an emergency light should, but what is the actual light like? Well, it is a surprisingly useful 26 lumens on full beam. I’m not going to pretend that this is a powerful torch, but it is certainly powerful enough to get you off the mountain should you need it. Though considering the size, this is an incredible amount of light. If you haven’t held one of these, and used it in the dark, you too will be amazed at the brightness for the size.

There are five light settings that are activated by a simple lever that is super easy to operate, These are proximity, for map reading and close stuff where you don’t need much light, Movement, for, well, movement. Walking, running, climbing etc. Then there are the three settings that are to help people find you. Two strobe settings. One in white light and the other in red. These can be set and left in emergency situations to help search parties locate you. The white is visible up to 200m away and runs for 75 hours. The red is visible up to 300m and lasts for 30 hours. Finally there is a proximity red beam which also last 30 hours and can be seen up to 300 m away. This feature alone is a potential lifesaver when things go wrong. Last year during the Frostskade race in the Scandinavian Arctic, one of the cp crew had set up an e+lite on red strobe and left it on a stick stuck into the ground. I have no idea from what distance away I first noticed it, but believe me it was a huge distance. Completely invaluable if you are injured and can’t move.

So, all I can do is sing praises for this little luminary wonder. There are of course limitations due to size and weight. All though the batteries last for an incredible period (proximity = 70h,maximum = 55h), they are not programmable, meaning that they progressively dim from the minute you start using it. An example of this is that on full beam, the distance the beam will travel is 29 metres, but after 30 minutes it will be reduced to 13 metres, and after 10 hours down to 6 metres. After 30 hours it will be down to 4 metres! This is a limitation, but certainly not a complaint as it is primarily designed to be a pack and forget item that can provide emergency lighting, which it achieves brilliantly.

So, there is a review which has been a pleasure to write as I can confidently say that everyone should own one of these, even non ultrarunners. It is just so practical for it’s size and the fact that the batteries stay good for so long when left. When ever I travel anywhere, I always throw it in and it’s surprising how often it gets used. One tip though – make sure you are disciplined with storing it as they are impossible to find if you forget where you put it!